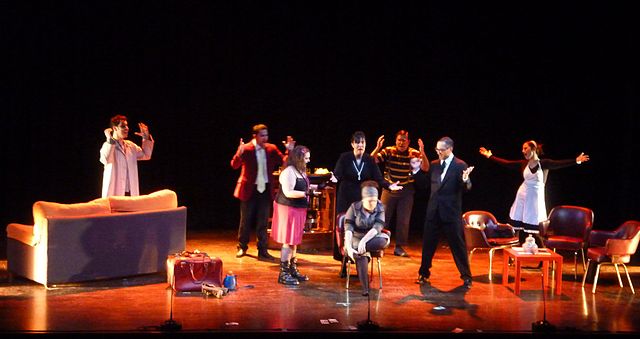 When auditioning for musical theater, you need to be be well rounded and well trained in all three areas, voice, acting and dance. Obviously, most actors have their strengths and weaknesses, the trick at auditioning is picking the right pieces to audition with to make the best of their talents.

Luckily, many roles in musical theater do not expect perfection in all three, but skill and knowledge of the three is expected. Casting directors will cast singers who can “move well”, or dancers that can also sing with emphasis being placed on the primary position.

Many actors new to musical theater make the mistake of believing that their natural talents alone are enough to get the role. While that may be true for community theaters and student projects, that is not true of the more competitive markets.

To succeed in musical theater, you must have natural talent that is honed and polished by good training.

Anything Goes on Broadway:

Since musical theater performers must sing, auditions are done a bit differently. A performer must know their vocal range and choose a song that not only reflects the style of show, but also shows off their voice at its best.

You will be required to perform the song you picked at a performance level while accompanied by the piano. Setting yourself apart from the crowd will involve not only doing a great job vocally, but also being able to portray the character.

When auditioning for musical theater, there will be a range listed. Knowing your range is key and you must pick auditions that suit your range. Voice coaches and trainers can give you insight into the roles you should be auditioning for as well as classify your voice.

Generally, most singers fall into one classification and for auditions, you would only apply to the auditions for the classification you fit. While some singers have a wider range, your best bet at landing a role would be in your own natural range.

If you are a dancer who is auditioning for musical theater, you should also be prepared to sing. While singing may be secondary, good dance training and technique may win you the part. Again, being well rounded and well trained is key.

To give yourself the best shot at the role, dancers should practice and become really familiar with as many steps and dance styles as possible. Know the steps and learn the popular routines. Learning as many routines as possible is a plus since many auditions will force you to learn a new routine quickly. Learning the audition routine is much easier when you already have knowledge of the steps.

Also, many dancers like to become familiar with entire shows and the routines involved. If you want to succeed at musical auditions, learning key or popular moves from major productions will give you an edge. Remember, those major productions and shows will be what you are auditioning for. By major productions, I mean the popular musicals such as

West Side Story
Grease
Chicago
A Chorus Line
42nd Street
Cats
Footloose and many others.

Anyway, to succeed at a musical theater audition, make sure that your routine is polished. Do not let your ego get the best of you and expect “natural” talent to carry you through. Keep in mind many people are very talented, what sets them apart is not just their talent but also the training they have to polish and perfect their natural ability.