A new Adam Sandler film is looking for 1000’s of extras! 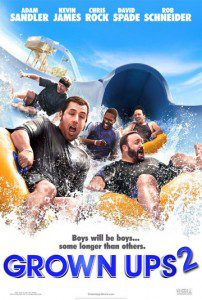 The movie will be shooting in Massachusetts this summer and is holding an open casting call for the movie in the Boston area. “Grown Ups 2” is now casting – “Grown Ups 2” has a star studded cast which includes Adam Sandler, Taylor Lautner, Salma Hayek, Maya Rudolph, Rob Schneider, Kevin James, Chris Rock, David Spade, Oliver Cooper and many others.

This is the sequel to the 2010 film about a group of old friends who come together many years after school. “Grown Ups 2” is set for a summer of 2013 release date.

The film, “Grown Ups 2” is looking for extras of all ages and any ethnicity – kids and adults are welcome to tryout. All shapes, sizes and looks will be needed.

Sande Allesi Casting is handling the open call. Sande Allesi casting are the casting directors that worked on hundreds of projects including Glee, The Social Network, and Pirates of the Caribbean. “Grown Ups 2” will begin filming in Marblehead beginning in May, 2012

The open casting calls are as follows:

You only need to attend one of the 2 scheduled open calls. Be sure to bring with you a current, non-professional photo that is 4 x 6. You do not need professional headshots and casting directors are requesting that the photo shows you as you look currently. You must bring a photo in order to get cast. Also, please bring a pen to write with.