Posted in New Jersey Theater by the Producer

The Summit Playhouse is delighted to announce the first production of its 2013-2014 season, “The Game’s Afoot” – Ken Ludwig’s clever, fast-paced twist on a Sherlock Holmes mystery. Open auditions will be held at 7pm Tuesday June 25th and Saturday, June 29th at the Playhouse, 10 New England Avenue. Production opens November 1st, with rehearsals to begin in early September.

“The Game’s Afoot” is an intriguing comedy thriller that also blends fact and fiction. Its lead character is William Gillette, a real-life star of the American stage during the early 20th century.

Gillette owned a replica of a medieval castle, filled with remarkably forward-thinking gadgets, tricks and mirrors. This is where, in “The Game’s Afoot,” he invites fellow cast members for a weekend of fun, which takes a sinister turn when one of his guests is stabbed to death. Gillette takes on the persona of Sherlock Holmes to solve the case before the killer strikes again.

Director Belle Wesel of Brooklyn – who recently directed “The 39 Steps” for the Chatham Community Players’ 2012 – 2013 season – requests that actors bring resumes and headshots if available. She is seeking eight actors to fill the major roles (three male and five female). Auditions will start with cold readings, in small groups, from sides provided. To access sides prior to the auditions, please visit www.summitplayhouse.org.

WILLIAM GILLETTE / SHERLOCK HOLMES
Male, 30’s to 40’s. Handsome, charming, leading man who can be funny and larger than life when necessary. (Actor with a capital “A”)

MARTHA GILLETTE
Female, mid-60’s. William’s mother. She is sweet and a bit vague, always has a drink in hand.

INSPECTOR GORING
Female 40’s to 60’s. British, eccentric, less overtly theatrical than the others, cleverer than she seems.

The Summit Playhouse has an open call casting policy. ALL roles are open, none are precast, and everyone is encouraged to audition. Please call or email Joann Scanlon with any questions: 973-457-4121, joannscan@aol.com. For directions or additional information, please visit www.summitplayhouse.org.

This casting notice was posted on auditionsfree.com 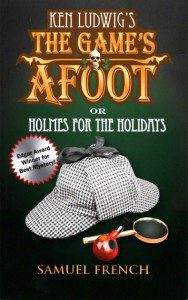