Now casting for SEASON 3 of CUTTHROAT KITCHEN on the FOOD NETWORK!

To be considered for season 3,  you must apply ASAP!

The producers of Top Chef and Alton Brown are bringing us another season of Food Network’s culinary competition, Cutthroat Kitchen.

Time is running out to be considered for season 3 of the Food Network show.

We’re looking for professional chefs who are fierce competitors with the talent & personality! You could win up to $25,000!

please see the casting flyer for more details on how to apply for Cutthroat Kitchen.

You can also email the following:

The show films in Los Angeles and filming for season 3 will happen between December 1st, 2013 and December 20th, 2013 (subject to change). Each episode films over just 2 days. If you are out of town, please keep additional travel days in mind. 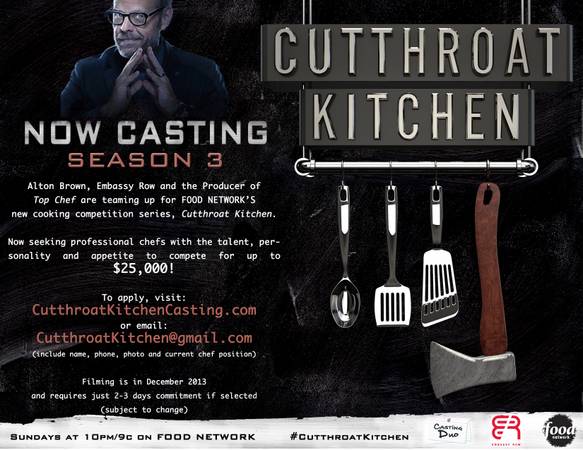 Cooking skills aren’t enough to win in Food Network’s Cutthroat Kitchen. This new competition series, chefs must also be crafty, clever and willing to sabotage their opponents. Led by Alton Brown as the kitchen’s cunning provocateur, this game features a briefcase filled with $100,000 in cash, four competitors, three rounds of cooking and auctions where chefs bid on items to help themselves or hinder their opponents.

Check out the trailer!