The feature film “My All American” is coming to San Antonio next week to film at Southwest HS Dragon Stadium and Alamodome.

We are recreating the 1969 “Big Shootout” Historical football game between UT and Arkansas!

Brock / Allen Casting needs to fill up the Alamodome and Dragon Stadium!

Sign up at: myallamericantx@gmail.com to be an extra! Be A Part of History and Movie Magic!

Come join the Arkansas Razorbacks Vs. Texas Longhorns movie recreation. The film is seeking athletic Caucasian men between the ages of 18 and 30 to portray the football players as well as others 18 years old and up, mostly male, to play fans, police, reporters and more.

“My All American” is a feature film based on the true story of Freddie Steinmark who played for Texas in the late 60’s. The project has been filming in stadiums across Texas and is on its way to San Antonio to film at the Alamodome as well as Southeast HS.

“My All American” stars Aaron Eckhart. Aaron Eckhart plays the Texas coach Darrell Royal. The part of football player, Freddie Steinmark will be played by Finn Wittrock.  The film is directed by Angelo Pizzo, writer and producer of “Rudy” and “Hoosiers” and should be released sometime next year.

San Antonio locals who fit the description are welcome to try for a small, paid extras part in the film by following the directions below.

San Antonio locals only please. You will be required to have valid Texas ID in order to be considered.

“My All American” filming next week in San Antonio-Get paid + Bonus!! 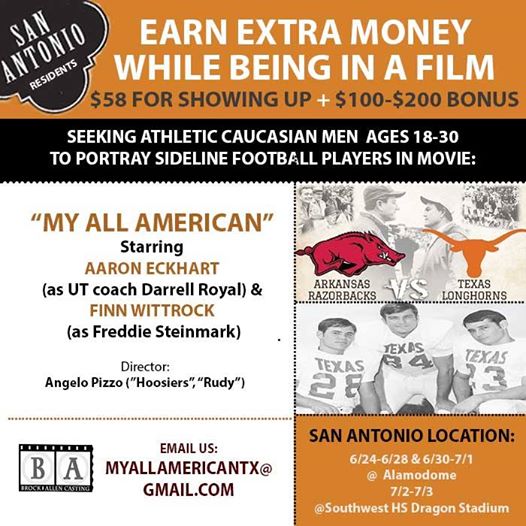