New western thriller “In A Valley Of Violence” is about to begin production in New Mexico. The films casting directors have released a casting notice for 2 speaking roles and other featured and recurring spots.

John Travolta and Ethan Hawke are starring in a new film together, In a Valley of Violence. The film comes from producer Jason Blum and Blum’s company, Blumhouse productions. Last month,  THR, reported that  Travolta and Hawke were in talks to star in the film,. Now it seems that both actors are on board as are Karen Gillan, Taissa Farmiga and James Ransone.

Ethan Hawke has worked with Blumhouse Productions previously on the horror films Sinister and The Purge. The new film is directed by horror master Ti West, however, the director has claimed that “In A Valley of Violence” will not be a horror flick. In his twitter feed, West stated that Valley is “not a horror movie.

In A Valley Of Violence, is set in the 1800’s and the American west. The film is described to be a revenge thriller.  The IMDB story line describes the movie as a revenge Western film set in the 1890s, where a man arrives in a small town seeking vengeance for his murdered friend. 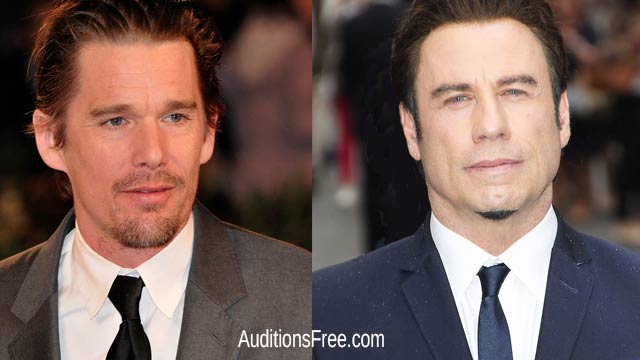 The projects casting director is Robert Baxter out of Albuquerque NM.

“IN A VALLEY OF VIOLENCE” STARRING JOHN TRAVOLTA AND ETHAN HAWKE.

Shooting begins JUNE 23rd and runs through to JULY 25th.

We are also accepting submissions for the following EXTRA positions, which are recurring for the full shoot June 23rd-July 25th:

If you or someone you know fits any of the above roles and are available for this movie please send in a recent photo submission and phone number to robertbaxtercasting@gmail.com

The film will be shooting in New Mexico through July.

“In A Valley Of Violence” does not have a specific release date, but it will be released sometime in 2015.