CABARET AT THE MERC is now holding auditions for their summer theater season which includes the shows “Next To Normal” and “Spring Awakening“.  This will be the first Annual Summer Series of Fully Staged Immerse Projects!

Auditions for the shows will be held next month at the theater and are by appointment only.

The season kicks off with the Pulitzer Prize winning show Next to Normal in July, followed by the Tony Award Winning Musical Spring Awakening in August.

CALLBACKS FOR NEXT TO NORMAL
Sunday, June 8 from 2-5 pm at Director’s Request

CALLBACKS FOR SPRING AWAKENING
Sunday, June 15 from 12-5 pm at Director’s Request
General Movement callback at 12 pm for ALL 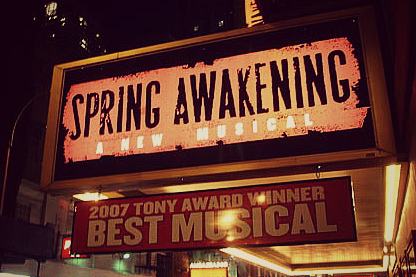 Please prepare 32 bars of a rock, folk or contemporary musical theatre song that shows off vocal range and technical ability. Please bring your book in case you are asked to sing another selection. Bring a headshot & resume and sheet music in your key. An accompanist will be provided. Auditions will be run by Producers. No Equity Monitor Provided.

Please note that the roles of Diana and Natalie have already been cast.
Seeking both Equity and Non-Equity.

DIANA This Role has Already Been Cast.

GABE Diana and Dan’s son, he is dashing, gentle, bright and playful. He can be both an angel and a demon to his mother, who idolizes him as a superhero (Rock Tenor to a B with a falsetto and comfortable mix) At least 18 to read 18.

DAN Diana’s husband and father to Gabe and Natalie, an architect, he is handsome and genuine and constantly tired. He provides a constant support for his family as he fights to keep his wife’s mind and illness stable. A belabored, dedicated father (High Baritone/Tenor to A) late 30s to mid 40s

NATALIE This Role Has Already Been Cast.

HENRY He is a jazz musician, romantic, stoner, slacker philosopher king. A classmate of Natalie and eventually her boyfriend, he supports her during on of the roughest times in her life (High Baritone/Tenor to an A) At least 18 to read 17

DOCTOR MADDEN/DOCTOR FINE Diana’s doctor, assured, a rock star of psychiatry – ‘on the young side’ of ageless (High Baritone/Tenor to an A with a Rock Sound) Late 20s to late 30’s

MELCHIOR (Lead) schoolboy, fiercely intellectual, handsome, headstrong and charismatic, an avid reader and philosopher, chooses to follow his own mind rather than the authority of adults or religion, tenor with good lows (A2-A4, falsetto to B4) Note: Role requires partial nudity. Male; ages 15-25; All Ethnicities.

HANSCHEN (Supporting) schoolboy, attractive, cunning, arrogant, a classmate of Melchior’s, is comfortable with his own sexuality and uses his looks and intelligence to manipulate others, tenor with good lows (A2-A4, falsetto to D5) Male; ages 15-25; All Ethnicities.

ILSE (Supporting) Bohemian, spirited, playful, a childhood friend of Melchior, Moritz and Wendla who has run away from an abusive home to become a Bohemian, mezzo (G3-E5) Female; ages 15-23; All Ethnicities.

MARTHA (Supporting) sad, dutiful, abused, one of Wendla’s friends, always wears a braid and has a secret crush on Moritz Stiefel, it is revealed she is being sexually abused by her father, alto (G3-C5) Female; ages 15-23; All Ethnicities.

OTTO (Supporting) Schoolboy, reclusive, a classmate of Melchior’s who dreams about his own mother, tenor with good lows (A2-A4, falsetto to D5). Male; ages 18-25; All Ethnicities.

TO SCHEDULE AN APPOINTMENT
For more information or to schedule an audition appointment please email Casting@CabaretatTheMerc.com.

In your email please attach
1) a digital version of your Headshot & Resume
2) Which roles you would like to be considered for.
3) Which day you prefer to be seen (Saturday or Sunday) We will do our best to accommodate all.

You will receive an email with your confirmation time.
There is no guarantee that you will be seen.

AUDITIONS & CALLBACKS FOR ALL SUMMER SHOWS