The Voice, American Idol, The X Factor, these singing competition giants have ruled the airwaves for years but ABC is set to bring the genre to an all new level with Rising Star.

This groundbreaking reality singing contest is set to begin production soon and the producers and talent coordinators at ABC are set to begin their search for the world’s next great vocalist or vocal groups now. Aspiring singing talents from across the globe can submit themselves today for a shot at competing on what promises to be the most incredible vocal competition in broadcasting history.

Rising Star is gearing up to completely reinvent the singing show format and discover music’s next superstar – and on this show the fans will have their votes count! The series will feature live performances by contestants with fans at home being able to vote via a special app in real time with the final say of who moves on and who goes home completely in the hands of the viewers at home. The performers will also be able to see the results of the voting as they perform – if they fall behind will they change something up? Will the pressure of being in the lead throw them off? The dramatic possibilities are endless and so is the talent! Never before has a reality series of any kind had this level of tension and immediacy and the results promise to be explosive.

The production team behind Rising Star is looking for solo, duos, and trio groups who are comfortable performing music from all genres to audition for this spectacular new series. Interested singing talents can apply for casting calls today by visiting www.iamarisingstar.com TODAY! 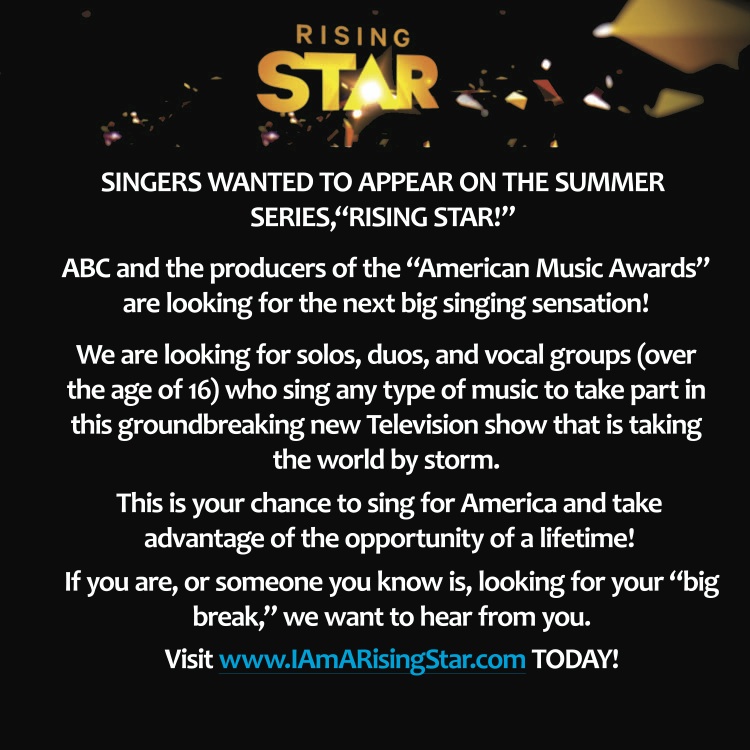 City or Location of call: Nashville and Boston

This casting notice was posted by: Keleigh Starr – Casting Producer