There is an online talent search / auditions going on for the new “Assassins Creed” film.

The movie will begin filming in the UK shortly and is holding online auditions to fill a few principal / main roles. Jina Jay casting is looking for a teen girl between the ages of 14 and 18 as well as an actress who is between 26 and 30 years of age for the project. The role will require an ability in urban street dance, parkour and or gymnastics.  No previous acting experience is required and all talent applying must speak English fluently. Please see the full role descriptions below.

Update: The deadline for submissions is approaching. The auditions for the movie roles are being held online via video submissions and will be closing this coming Monday. Those interested in landing a speaking role in the movie better rush it and get their submissions in ASAP.  The casting call is open to talent fitting the descriptions nationwide.

“Assassins Creed” will be based on the Ubisoft video game of the same name. Ubisoft is co-publishing the movie with New Regency. Michael Fassbender has the lead and will be playing 2 characters. He will be playing the present character as well as his Assassin ancestor. The film will supposedly have many flashback scenes between the present day and the past. 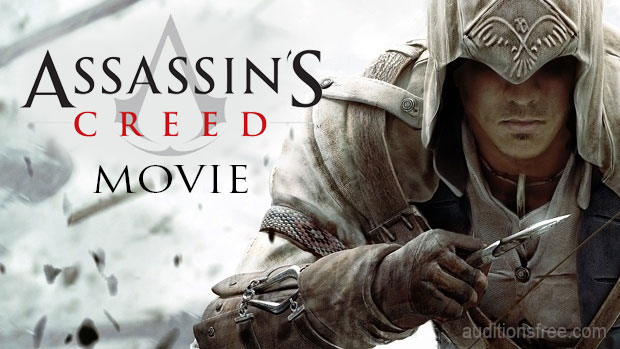 According to the IMDB page for the sci-fi action adventure “Assassins Creed” will focus on a bartender named Desmond Miles. Miles gets abducted by a company called “Abstergo Industries” to explore the mind of his ancestor, Altaïr Ibn La’Ahad, in order to recover a sacred artifact. “Assassins Creed”  will be directed by Justin Kurzel and produced by Regency Enterprises, Ubisoft Motion Pictures and DMC Film. “Assassins Creed” had run into some production delays. Originally, the production planned on filming last year giving the film a 2015 release date, but production was pushed back for a year and we can now expect “Assassins Creed” to hit the movie theaters around Christmas of 2016.

The movie will be directed by Justin Kurzel and is scheduled to begin filming in London this coming summer.

We are looking for girls (14-18 yrs old) and young women (26-30 yrs old) with strong ability in any of the following fields:

Urban street dance & hip hop, Parkour and Acrobatics.
Any ethnicity. Must be able to speak English.

If interested, talent can apply online by following the directions on the casting director’s website, here. Again, no previous acting experience is required and the deadline to apply is Monday the 11th..