Auditions for the Broadway bound show will be held in Los Angeles. The show is seeking Asian male and female dancers who can sing as well as Caucasian male dancers.

George Takei, widely known for his role on Star Trek is taking on new frontiers of his own. He is now taking his memories of childhood at an interment camp to the stage in “Allegiance“, a musical about that time. In a recent interview with The Associated Press, Takai commented “I consider this production my legacy project.”

According to a write up about the show, “Allegiance” is a multi-generational tale with two love stories that’s framed by a Japanese-American war veteran looking back on his family’s time in a Wyoming camp. The show will be the first Asian-led cast in a Broadway musical since “Flower Drum Song,” from over a decade ago. The new musical will be hitting Broadway in the Fall of 2015. Previews are set to begin on Oct. 6 at a Shubert Theatre.

“Allegiance” the musical will feature music and lyrics by Jay Kuo. The music for the show is described as a mix of Big Band and Japanese folk melodies. The show will be directed by Stafford Arima (“Carrie” and “Altar Boyz”), whose father also experienced being sent to an interment camp in Canada during the war. 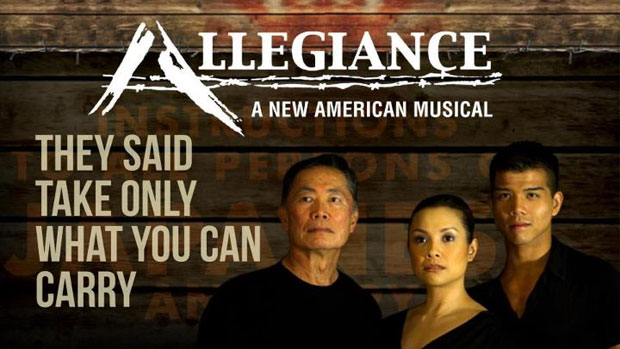 Inspired by the childhood of and starring George Takei (gaman.me/SamKimura), Allegiance is an epic story of love, war and heroism set during the Japanese American internment of World War II, and follows the Kimura family in the weeks and years following Pearl Harbor, as they are relocated from their farm in Salinas, California to the Heart Mountain internment camp in the rural plains of Wyoming.

Allegiance sheds new light upon a dark chapter of American history. One of the first Asian musicals in more than a decade, with a stunning and moving score, Allegiance connects the audience with universal themes of love, family and redemption.

Allegiance had its World Preview at The Old Globe theater in California in 2012, one of the largest and most highly-respected regional theaters for development of new musicals in California and in the United States.

Open auditions for the Broadway show will be held in Los Angeles.  The show is seeking male Asian and Caucasian dancers as well as female Asian dancers.

All dancers must have singing ability. The auditions will be held this Friday. Please see the casting flyer below for further details, audition dates and location.  Dancers who are unable to attend the open call may also apply by sending their photo, information and resume to the email listed below. 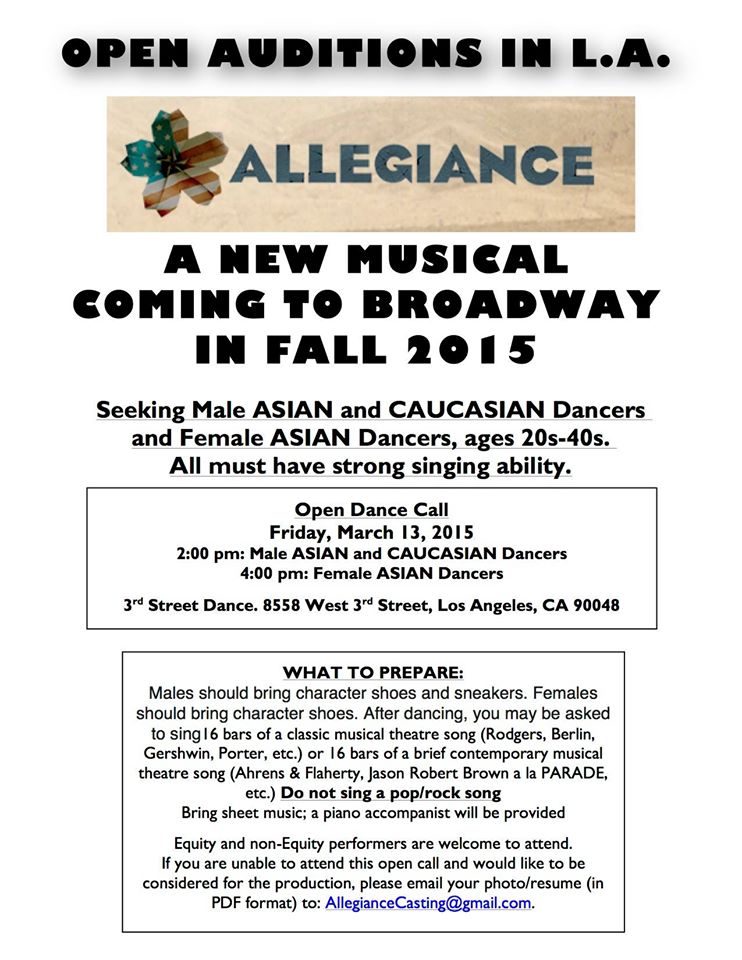