The show will be directed by Gregory Newton. A Few Good Men, a play by Aaron Sorkin, is the story of military lawyers at a court-martial who uncover a high-level conspiracy in the course of defending their clients, two United States Marines accused of murder. A film version featuring Tom Cruise, Demi Moore and Jack Nicholson was made in 1992. 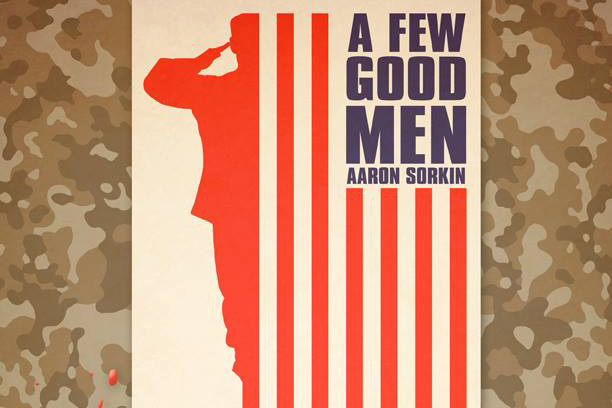 Below are the character descriptions.

LT. J.G. DANIEL A. KAFFEE – Spunky, self-absorbed, a bit chaotic, but very talented lawyer who finds himself being challenged and stretched in ways he’s never been. Rarely leaves the stage. Rapid-fire intelligence and caustic wit. Loves hearing himself talk and thinks he’s cool, but learns a valuable lesson about duty.

LT. CMDR. JOANNE GALLOWAY – Highly motivated go-getter who thinks she needs to prove herself as a woman in the military. Knows the truth, but finds it tough when others can’t recognize it. Tries to fight in the purest sense of the word but knows when she’s outmatched – but goes down fighting. A real fiery character who sometimes bites off more than she can chew.

LT. J.G. SAM WEINBERG – Career-focused lawyer who misses his family, but loves what he does – which is playing second fiddle to a much more talented and vocally astute side-kick (Kaffee). Provides a lot of comic relief and dialog gymnastics.

LT. COL. NATHAN JESSEP – The essence of Marine: tough, focused, uncompromising, powerful in speech and physical presence, intimidating to everyone, but still able to schmooze when necessary. Believes he is the hero of the story and just might be right. A truly edgy, scary, but fascinating man.

LT. JONATHAN JAMES KENDRICK – Over-the-top duty-focused Marine who exemplifies all that is wrong with myopic leadership. Uses the Bible as a thumping card when he needs to prove a point. Instigates many confrontations. Not likeable at all…and he doesn’t care.

LT. JACK ROSS – Prosecuting attorney who solidly knows the law, the Marines, and his counterpart in court. Strong and honorable, likeable in a conflicting way. Good friends with Kaffee, but knows he has to beat him.

CAPT. MATTHEW MARKINSON – Marine Executive Officer who tries to secretly push the truth to the forefront only to find everything he’s ever been taught being challenged. A good counterpart to Jessep – someone we want to believe in, but maybe someone who’s Marine-ness is questionable.

PFC LOUDEN DOWNEY – Sweet, down-home boy-next-door who probably joined the Marines because it’s the best way to utilize what little brain God gave him. Servant side-kick to the nth degree…will fall on a grenade if ordered to. Naïve and genuine while also being a little “slow”.

LANCE CPL. HAROLD W. DAWSON – Essence of Marine honor with a touch of genuine humanity. Believes to the core in the Corps – its honor and its code – and is willing to state that in court even if it gets him life in prison. But really is a soft-hearted good guy who wants to balance service, honor and the human condition. A protector and a fighter. PFC

WILLIAM T. SANTIAGO – Marine whose inability to carry his load, despite its reality, is the cause of the conflict in the show. Appears only in monolog flashback and always as a boy who tries to be a man, but just doesn’t have the parts to do it.

CMDR. WALTER STONE – The doctor who tries to maintain medical protocol and military prowess at the same time. Gets caught up in a lie and might have the capabilities of fighting it.

CAPT. JULIUS ALEXANDER RANDOLPH – Strong but decent Judge of the Court Martial who oversees the trial with a firm fist and short, spark-like manner of speaking.

CPL. JEFFREY OWEN HOWARD – Goofy and fun Marine who provides a lot of comic relief, but also a lot of truth in what goes on behind the scenes of the Marine training. A fun role for younger actor.

CAPT. ISAAC WHITAKER – Kaffee’s JAG boss who assigns him to the case. Appears only at the start of the show but whose presence and command of the situation needs to set the tone for the entire play. Easy going, but still knows the rules, likes to “play along” and jest, but ultimately pretty serious.

ENSEMBLE – The play requires several military people who serve as sentries, guards, officers in the jury, etc…some have lines, others merely appear on stage…all of whom create a solid visual and character piece for the overall look and feel of the show.

Auditions are on a first come/first save basis. No appointments necessary. Sides will be available.

Playhouse 22 is a non-profit, community theater troupe. No paid stipends will be available. Questions can be emailed to info@playhouse22.org or by calling (732) 254-3939. For more information about Playhouse 22, please visit www.Playhouse22.org.

This casting notice was posted by: Playhouse 22