Netflix renewed the popular drama for a 4th season which is now filming around the Maryland area. The show’s casting directors at MHC just released a new casting notice for background roles and they need 1000s of people to work as paid extras in the Baltimore area. So many in fact, that they will be arranging car pools for folks who may be coming in from other areas such as Atlanta. The show needs tons of people for a huge convention scene so people who would love to be on the show as a paid extra have the opportunity to work with their friends, families, church groups and any other groups.

“House of Cards” is a scripted Netflix series about a scheming politician, played by Kevin Spacey, and his equally conniving wife. House of Cards is set in D.C. and examines ruthlessness, corruption and power struggles within politics.  The streaming series focuses on Frank Underwood played by Kevin Spacey, a politician from South Carolina who, after being passed up for Secretary of State, seeks revenge against those who he believes wronged him. By season 3, his scheming has risen him to the Presidency.   Claire Underwood, played by Robin Wright, is his wife and partner in crime. Claire proves to be just as ruthless and power hungry as her husband, Frank.

Season 3 left fans with a large question on their minds…. will Claire actually leave Frank.  In the season 3 finale, Claire told Frank she was moving out of the White House and leaving him… maybe for good. Fans will have to wait until 2016 to get their answers. No official release date has yet been announced but the show will most likely premiere during the spring. 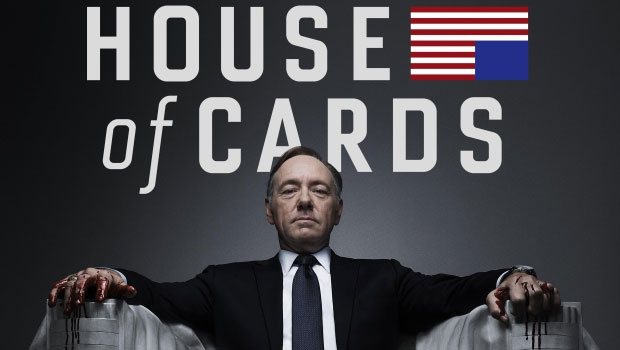 Booking MANY MANY PEOPLE
We especially need your friends and neighbors Saturday please share with any churches.
October 7, 8, 9, & 10

We need 1,000’s of people to be paid extras! Please spread the word!

Requirements:
– Must be available for 12+ hours for at least one day of shooting.
– Must be able to get to the Baltimore Area for a potentially very early morning call time

– You can apply even if you’ve already worked this season
– Business attire a plus, but not required
In Your Submission:
– Full Name:
– Cell Phone #
– Day(s) available
– 2 Recent Selfies
– Non sag only no sag spots left sorry 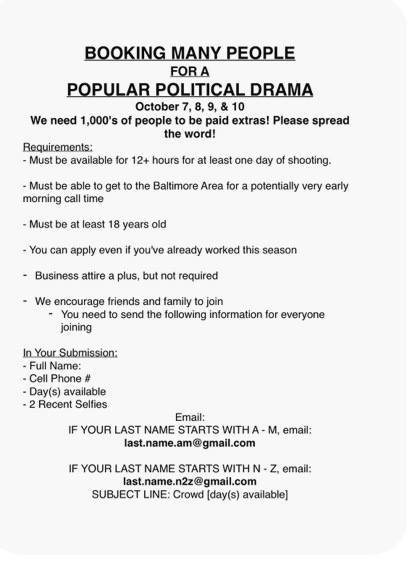 Extras willing to come from Atlanta:

Adventurous Atlanta Car Poolers!
Seeking GROUPS of people who would be willing to travel to Baltimore for a full week of work, this Tues-Sat. 10/6-10/10. People willing to carpool and possibly share a room. Not willing to book just a single person, too expensive and too far, but groups would be great!

We cannot name the show, however, it is a “popular political drama”!

Convention scene. 18 and up. With slacks/blazers, political look.

If interested please email us at the email below with the following details. Please state if you have a group or if you are an individual willing to be put in a group: