An open casting call for paid extras is coming to San Bernardino during the first week of June.

David Fincher (Se7en, Gone Girl, and The Social Network) will be directing the music video oriented show which is set in the 80s…  the years when MTV actually broadcast music videos. David Fincher spent the 80s directing music videos for top music artists like Madonna, Sting and the Rolling Stones and now he will revisit his old music video days in the HBO show, “Videosyncrasy“, previously called “Living On Video“.

According to the entertainment news website, Deadline,  Living On Video (“Videosyncrasy“)  will be a  half-hour comedy about L.A.’s music video industry in the early 80’s. The show will focus on a young college drop out who moves to L.A. to get into the movie business and ends up landing a job as a PA for a music video producer.

This is one of 2 music oriented shows coming to HBO. The other is the Martin Scorsese / Mick Jagger Rock n’ Roll series set in the 70’s.

Got that 80’s look? The HBO series is looking to cast 100’s of adult background actors. They are seeking men and women who can pull off a great 80’s look. Central is seeking many types of 80’s looks including rockers, long haired musicians, record label types, bouncers, actors, models and more. All roles are paid.

So break out the Aqua Net and come on down to the Hotel San Bernadino on the 6th of June between the hours of noon and 4 PM to meet with casting directors and try out for a small role in HBO show. The show is also looking for folks with cars that are between 1975 and 1983. The show will be filming in mid June in the San Bernadino area.

Those attending should bring a picture they can leave with the casting directors as well ID and documentation needed for employment in California. See the flyer below for additional information about that. 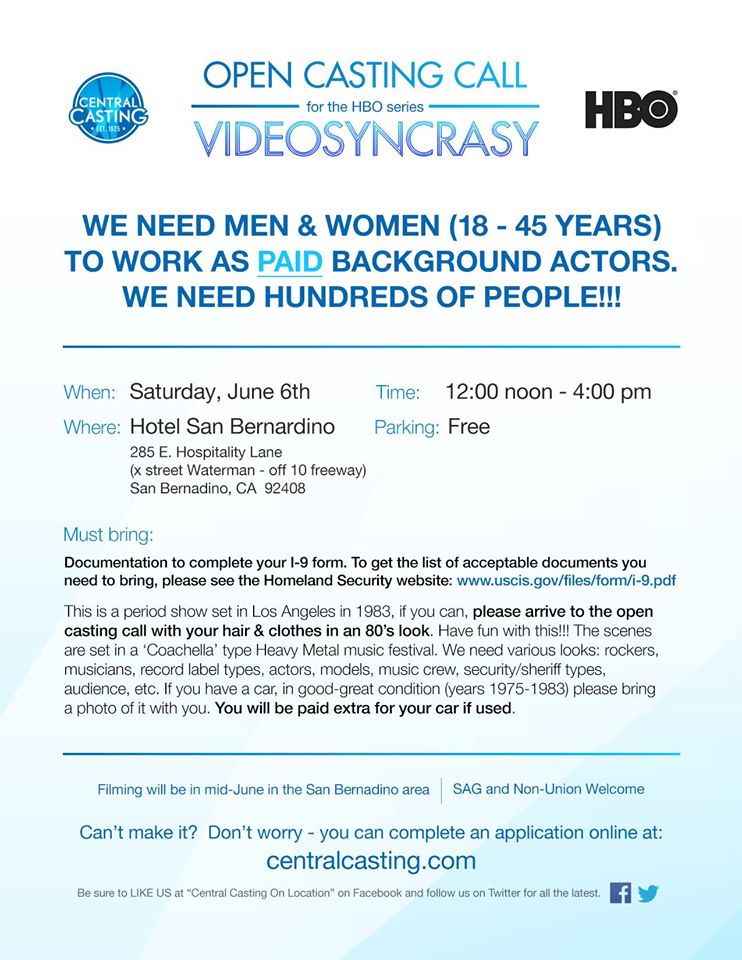