Do you know a child who loves science? Who loves experimenting? Maybe that child you know could be the next cast member on Curious Crew, a new original series from WKAR.

Participants should be prepared to wait an hour or more after check-in.

A parent or guardian must accompany any child auditioning.

Selected Curious Crew cast members must be available for one or more of these planned production dates:
June 8, June 15, June 22, July 6, July 13.

Check-in will be inside the South Entrance of the Communication Arts & Sciences Building. Google Map.

Free parking is available in the adjacent ramp located at the northeast corner of Trowbridge and Red Cedar. 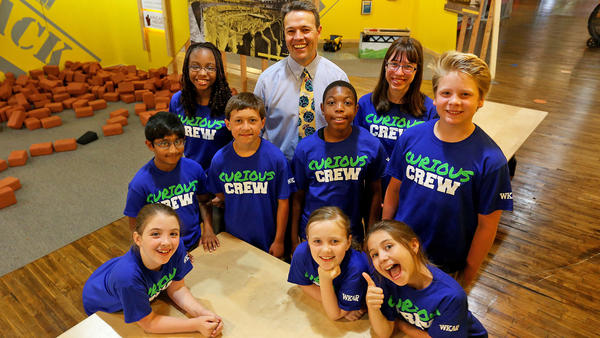 In the second season of this original series from WKAR, host Rob Stephenson and his “Curious Crew” of kids take a hands-on approach to scientific exploration. In the first season of the series, Rob and crew investigated principles of magnetism, sound, gasses, and other STEM topics. The series was recorded at Impression 5 Science Center in Lansing, Mich., and debuted on WKAR-HD in November of 2014.

Season One of Curious Crew is available for viewing at video.wkar.org and in the PBS App on iPad, iPhone, Roku, Xbox 360, Apple TV.

Rob Stephenson is a National Teacher of the Year finalist, 2009-2010 Michigan Teacher of the Year, and 2006 winner of the Presidential Award for Excellence in Science Teaching. He is currently STEM Consultant for the Ingham Intermediate School District.

For questions regarding the Curious Crew casting call, please contact
(517) 884-4700