Based on the Oscar-winning DreamWorks Animation film, Shrek The Musical is a Tony Award-winning fairy tale adventure! Shrek brings all the beloved characters you know from the film to life on stage and proves there’s more to the story than meets the ears. Shrek presents a treasure trove of creative opportunities and fun for the whole family, as we learn that beauty is truly in the eye of the ogre.

Auditions are open to the public, but you must schedule an appointment. Email jessica.pinsky@suffolkcenter.org to schedule your audition (preferred),
or call 757-923-0003 x 3003*

OPEN AUDITIONS FOR “SHREK THE MUSICAL”, SATURDAY SEPTEMBER 24TH AT THE SUFFOLK CENTER FOR CULTURAL ARTS

Presented by the Suffolk Center in partnership with rpm Dance.

How to set up an Audition
Auditions are open to the public, but APPOINTMENTS ARE REQUIRED. Please contact Jessica Pinsky, Program Coordinator, to schedule your audition. Go to http://www.suffolkcenter.org/shrek-the-musical-audition-notice/ 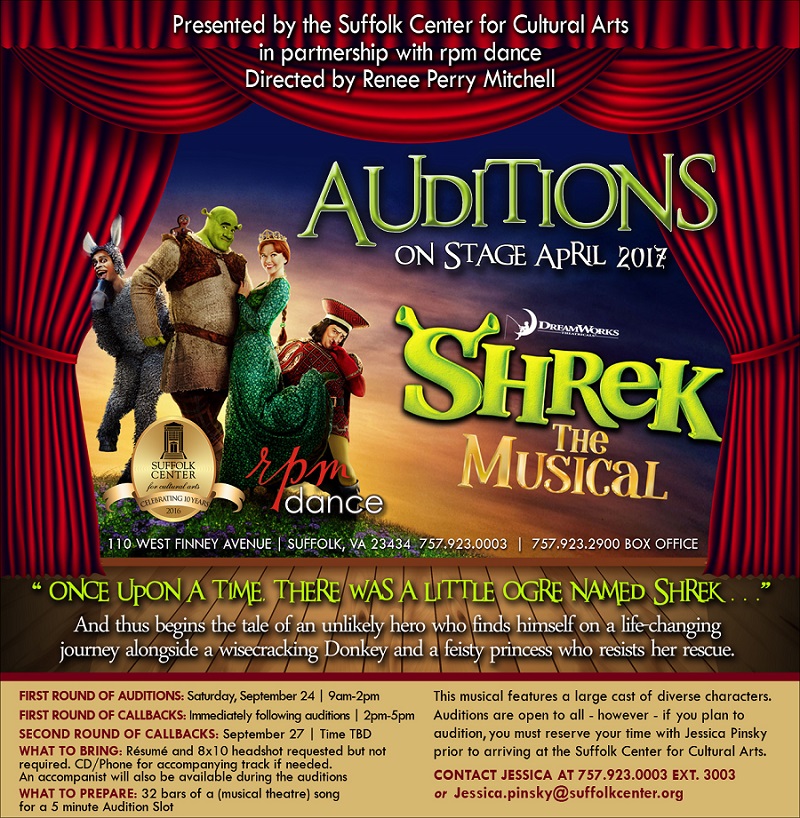 32 bars of a musical theatre song. -Live accompanist will be provided, or you may bring your own accompaniment (CD, etc.) if you prefer. -Résumé and 8×10 headshot requested but not required.

Production Schedule
Persons chosen for the production will need to be able to commit a significant amount of time for rehearsals beginning October 1, 2016. The performances will be Saturdays, April 1st and 8th, 2017, and Sundays, April 2nd and 9th, 2017.

Shrek
Our story’s title character. A big, green, terrifying ogre who lives alone on a swamp. He embarks on a journey to rid his land of fairytale creatures and, along the way, falls in love with Fiona. Begins as a grumpy hermit, but reveals his layers and eventually becomes the hero. You do not need to be a large person to attempt this role. You need to have a large spirit and we will do the rest with padding! Gender: Male Age: Teen to Twenties
Vocal range top: G#4
Vocal range bottom: A2

Fiona
The beautiful princess of Far Far Away, she transforms into an ogre every night when the sun sets. Rescued by Shrek and eventually falls in love with him. Quirky, blunt, and multi-talented, she is not an ordinary princess. Gender: Female Age: Teen to Twenties Vocal range top: G5 Vocal range bottom: F3

Donkey
A talking donkey who joins Shrek on the run from Farquaad’s guards. Quite the chatterbox, he is not deterred by Shrek’s looks and practically forces himself into his good graces. Easily frightened and pushy, but also an optimistic with heart.
Gender: Male
Age: Teen to Adult
Vocal range top: B4
Vocal range bottom: C3

Lord Farquaad
The comically short, ruthless ruler of Duloc. He is in search of a princes to marry so that he can become king. Has an intensely unfair bias against fairy tale creatures that stems from a resentment of his father. Self-absorbed, lonely, and cruel.
Gender: Male
Age: Plays 30 to 45
Vocal range top: D5
Vocal range bottom: B2

Dragon
A dragon that has been charged with guarding Princess Fiona in her isolated castle. She eventually falls in love with Donkey and attempts to keep him there forever. Imposing and flirtatious, but tired of her job as the glorified baby-sitter.
Gender: Female
Age: Teen to Adult
Vocal range top: Eb5
Vocal range bottom: F3

Gingy
A gingerbread man initially kidnapped by Lord Farquaad. His wit and resolution help him both avoid trouble and inspire the rest of the fairy tale creatures. Puppet. Can be operated by actress appearing as Sugar Plum Fairy.
Gender: Female
Age: Teen to Adult
Vocal range top: C#5
Vocal range bottom: B3

Pinocchio
The leader of the fairytale creatures. He is an animated puppet whose nose grows every time he lies. Plenty of sass with a penchant for lying.
Gender: Male
Age: Pre-Teen to Adult
Vocal range top: F#4
Vocal range bottom: E3

City or Location of call: Suffolk VA
Please submit to: jessica.pinsky@suffolkcenter.org by 2016-09-24

This casting notice was posted by: Suffolk Center for Cultural Arts