Potential Shoot dates: Production will occur in May of 2017, based on talent and crew availability:
Synopsis: The video is a short horror movie parody. It begins with three teens being chased by a chainsaw-wielding maniac. They consider darting across a set of train tracks to try and lose the maniac on the other side of the train. However, as the maniac catches up to him, he begins taking on the role of a concerned adult, explaining to them how dangerous it is to be near a moving train. After the train passes, he revs his chainsaw and begins chasing the teens again. Actors must be able to clearly express the changes in tone as the PSA transitions from a feeling of terror as the teens are being chased, to feelings of confusion and humor as they receive an unforeseen reprimand about train safety from the chainsaw man.

TEENAGER 1:
Age: Late teens to early 20s male. Fit, macho, jock- looks like he should be the hero.
Role: In the heat of the chase, he is frantically trying to convince his friends to cross the train tracks in order to get away from the man with the chainsaw. The other two teens refuse to cross, as they would rather take their chances with the chainsaw man than cross the tracks before it is deemed safe to. His face turns from terror to exasperation as the chainsaw man grows closer and closer. This changes to bewilderment when he is scolded by the chainsaw maniac for being oblivious to the dangers of unsafe train crossing. Finally, he submits to the chainsaw man and agrees to wait until it is safe to cross.
Makeup artist will be provided; Actor will provide his own wardrobe and hair.

TEENAGER 2:
Age: Late teens to early 20s female.
Role: A friend of Teen 1 and Teen 3. She is adamant that they should wait and not take the risk despite Teen 1’s plea.
Makeup artist will be provided; Actor will provide his own wardrobe and hair.

TEENAGER 3:
Age: Late teens to early 20s male.
Role: A friend of Teen 1 and Teen 3. He is in tandem with Teen 2 and would rather take his chances with the chainsaw man than cross the tracks. 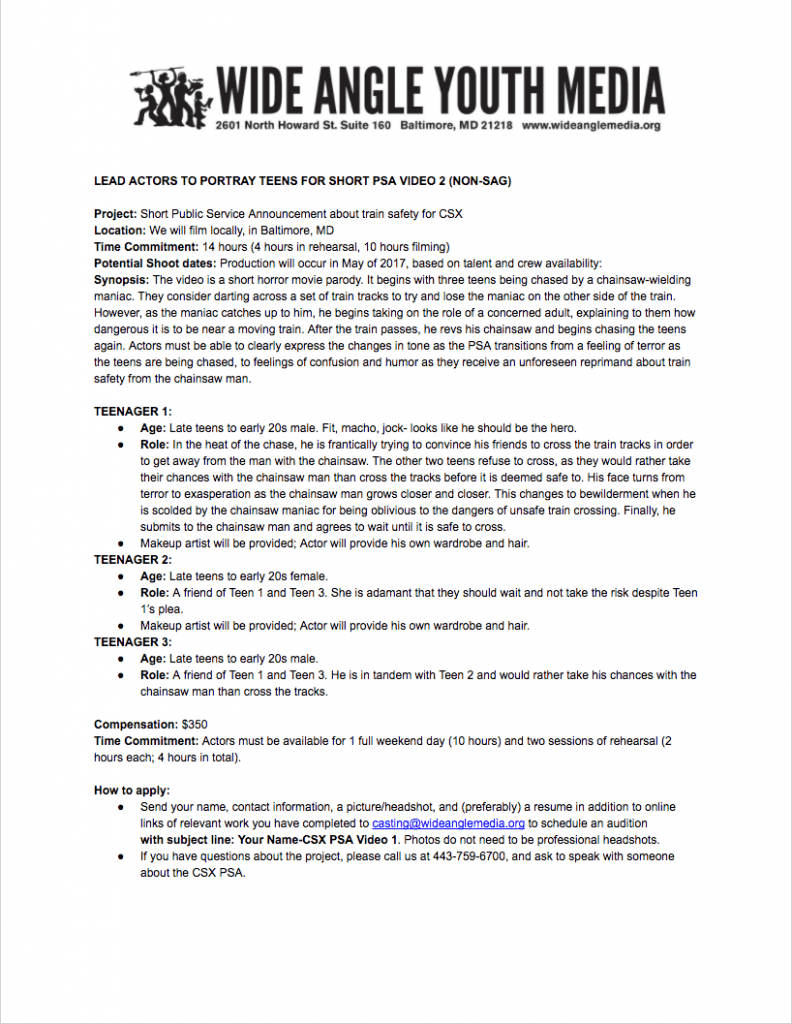 Compensation: $350
Time Commitment: Actors must be available for 1 full weekend day (10 hours) and two sessions of rehearsal (2 hours each; 4 hours in total).

How to apply:
Send your name, contact information, a picture/headshot, and (preferably) a resume in addition to online links of relevant work you have completed to casting@wideanglemedia.org to schedule an audition
with subject line: Your Name-CSX PSA Video 1. Photos do not need to be professional headshots.
If you have questions about the project, please call us at 443-759-6700, and ask to speak with someone about the CSX PSA.

This casting notice was posted by: Wide Angle Youth Media