Audition Notes: Please be familiar with THE MUSICAL and not the movie! Actors should come prepared to audition with a one-minute monologue and 16 bars of a musical theatre song, from the show or in the style of the show. Seeking strong actors and strong singers wanted. Director will cast non-traditional types. There is no pay for roles. Sign up for the Orlando audition at: https://www.signupgenius.com/go/70a0f49a8a82fa7f85-dreamgirls. OR, visit: www.sparkylentertainment.com. 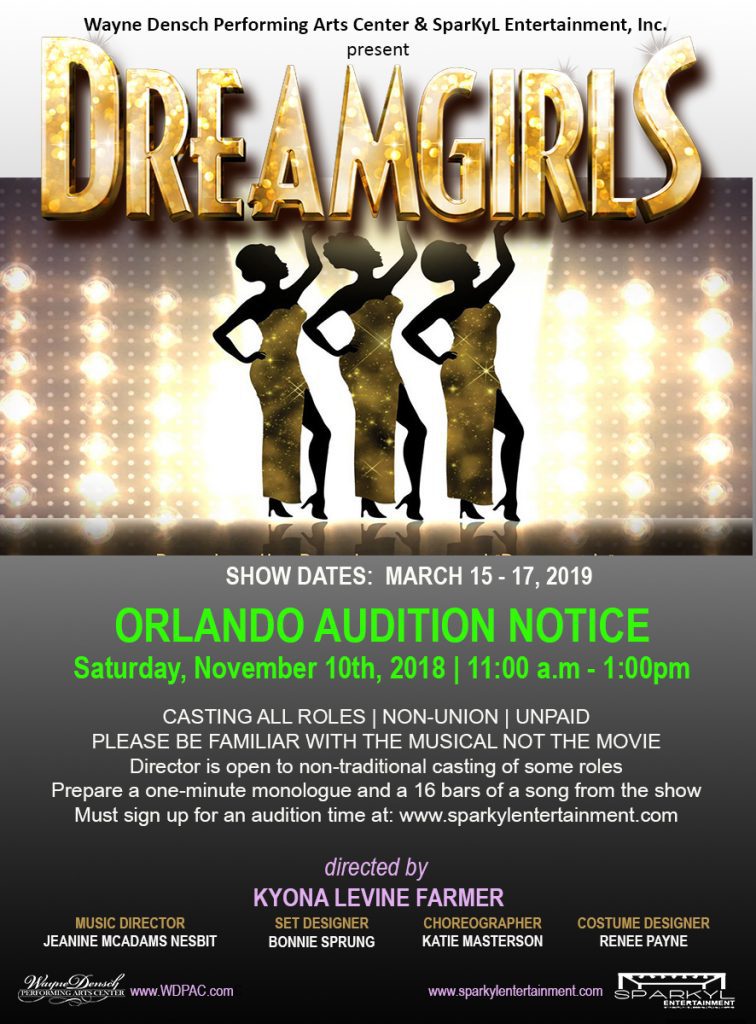 AVAILABLE ROLES:
EFFIE MELODY WHITE: Female, 20-40ish, African American – powerful belt, large and in charge, lead singer of The Dreamettes. Journeys from snappy confidence to depths of betrayal, but triumphs in the end. Seeking actor with willingness to dig deep emotionally as well as belt.

LORRELL ROBINSON: Female, 18-30ish, African American – soprano, the youngest backup singer. Speaks her mind. Eager for success, swept off her feet by married James Thunder Early. High energy and attitude encouraged for this role, with a touch of the romantic.

MICHELLE MORRIS: Female, 18-40ish, Any Ethnicity – soprano, replacement backup for Effie. Wants to stay out of in-fighting. Falls in love with C.C., and helps bring brother and sister together in the end.

JAMES “THUNDER” EARLY: Male, 30-50, African American – tenor/strong falsetto, a James Brown-like flashy star of early R&B that Curtis steals from Marty. A trendsetter, but trends pass him by. Be ready to be a showman, and let loose.

MARTY MADISON: Male, 40’s-60’s, Any Ethnicity – baritone, early manager of James Early, cleans up after many of James’ messes, old-school, honest and loyal.

This casting notice was posted by: SparKyL Entertainment Inc