You’re a Good Man Charlie Brown Information Sheet:
All you need to know for the BMT and the BJT productions
Brisbane Musical Theatre (BMT) is announcing Auditions for The Revised 1999 Version of

Who Can Be Involved: Brisbane Musical Theatre is producing for a young adult
cast and looking for male and female actors who can play from their late teens to
their early 30s.

Rehearsals: Rehearsals will be held from 7pm to 10pm on Monday and Wednesdays as well as Sunday Afternoons from 12:30-3:30 leading up to the performances. All actors must sign an agreement that they will be able to make all rehearsals and performances. Rehearsal schedules will be announced and given out at the auditions.

AUDITION DATE: Saturday October 26th (1pm-3pm)
BMT Auditions Requirements:
1. Prepare a general monologue from the audition document on Brisbane Musical Theatre’s Facebook page.
2. Prepare the general audition song:
the first 32 bars of “You’re a Good Man Charlie Brown”
3. Be ready for a short dance audition
4. Be ready to improvise at the directors discretion
5. Be familiar with other songs from the production in case you are called
back.

City or Location of call: North Brisbane, Queensland
Please submit to: bmt@gmail.com by 2019-10-25

This casting notice was posted by: Brisbane Musical Theatre 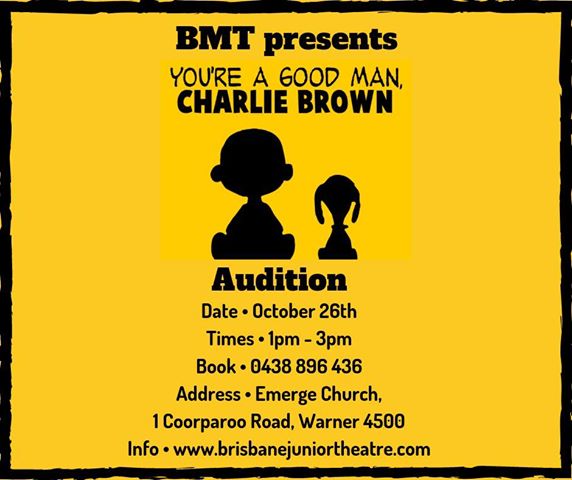