No Monologues, Sides will be provided from the show. People of all races, genders, and abilities are encouraged to audition for this inclusive and collaborative production.

The Crucible by Arthur Miller

Sides will be provided at audition (no monologue necessary).

People of all races, genders, and abilities are encouraged to audition for this inclusive and collaborative production.
In the tight-knit, Puritan town of Salem, a group of girls are discovered dancing in the woods and then immediately fall ill. When no earthly cause can be identified, fear and suspicion begin to percolate in the small, isolated community, that something larger, more fearsome, and other worldly may be to blame. Buried secrets and resentments are brought to light, and attempts to root out evil lead to finger-pointing, treachery, and betrayal. When everyone is a suspect, sometimes the most dangerous threat to the community may be the community itself. 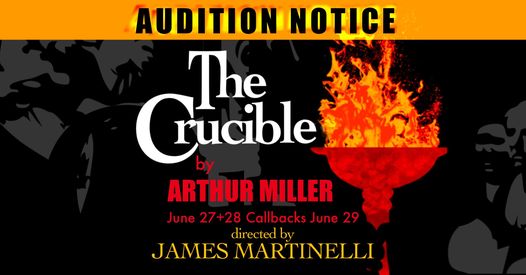 Cast Breakdown: The cast is made up of 18 players.

John Proctor: (M/30-39/All Ethnicities) A local farmer; independent, forthright, opinionated; deeply complicated; despises hypocrisy, most especially in himself; has little patience for the pretense and duplicity of the church or for making a show of his devotion; tormented by guilt over his recent affair with Abigail Williams; his combination of skepticism and outspokenness makes him especially dangerous in the eyes of his righteous neighbors.

Elizabeth Proctor: (F/30-39/All Ethnicities) John Proctor’s wife; honest, proud, faithful, and principled; a person who sees little or no latitude when it comes to what is right; at times, her rigid austerity tips toward coldness; deeply hurt by her husband’s infidelity, but still loves him fiercely.

Judge Danforth: (M/50-69/All Ethnicities) Deputy Governor of Massachusetts; called to Salem to preside over the trials; imperious, absolute, commanding; relishes his own power; knows the law and is unwilling to deviate from it or entertain exceptions or opposing views; not afraid to use his position and authority to bully suspects and dissenters.

Reverend John Hale: (M/40-59/All Ethnicities) respected minister and expert on witchcraft; brought to Salem to judge the veracity of the girl’s claims; observant, judicious, rational; a man of faith; he truly believes in his power to heal and return individuals to God; believes honestly in the trials until they begin to veer out of control.

Reverend Samuel Parris: (M/40-49/All Ethnicities) minister of the church in Salem; a widower, with no interest in children, he has been left to raise a young daughter; self-righteous, austere. and controlling; protective of his reputation and assets; paranoid that his enemies are attempting to overthrow him; his power and status within the community are irrevocably undermined when his young daughter is seemingly possessed by the devil.

Abigail Williams: (F/16-25/All Ethnicities) Reverend Parris’s 17-year-old niece and the antagonist. Impulsive, strong- willed, passionate, with a present sexuality and a fiery temper; keenly aware of her own power, she is ruthless in her pursuit of getting what she wants.

Giles Corey: (M/50-79/All Ethnicities) a farmer; salt of the earth, plainspoken, hardworking; man of the land, who is still physically powerful; straightforward and unrefined; has little formal education and relies on his ‘common sense’ which he finds more relevant than the dominant public opinion; provocative and easily proved, speaks before thinking; underneath this rebellious attitude resides a good heart.

Ezekiel Cheever: (M/30-49/All Ethnicities) officer of the court; takes his responsibilities to the court extremely seriously and does its bidding even when it involves arresting friends and neighbors; torn between duty and humanity; role will likely double with George Herrick and Hopkins.

George Herrick: marshal of the court; sympathetic and kind to the accused who are under his watch; attentive to his duties, but not overzealous
Hopkins: guard in Salem prison; appears briefly in the last scene but does not speak.

Susanna Walcott: (F/16-25/All Ethnicities) one of the girls who joins Abigail in crying witchcraft; nervous and worried.

Judge Hathorne: (M/40-49/All Ethnicities) judge presiding over the trials, second in command to Judge Danforth; confident and resolute; believes strongly in his own authority and importance; wilfully ignorant to any dissent voiced by the community.

Tituba: (F/30-49-Black/African Descent) Reverend Parris’s slave, born in Barbados and brought to Salem; wary and cautious, she is aware of the tenuousness of her situation and her lack of agency or power, exhausted and worn down after years of abuse; spiritual; rooted in a cultural tradition that is perceived as completely foreign by the small, insular Salem community.

Mercy Lewis: (F/16-25/All Ethnicities) Putnam’s serving girl and one of the girls who joins the group crying witchcraft; clever and sly; friend and confidant of Abigail’s, she functions as Abigail’s lieutenant and second in command.

Thomas Putnam: (M/40-49/All Ethnicities) wealthy landowner in Salem; savvy, politic, shrewd; even in the furore and chaos of the trials, he is able to see opportunity for profit.

Ann Putnam: (F/40-49/All Ethnicities) wife of Thomas Putnam; brittle, fretful, and anxious; haunted by the loss of her seven children, her grief has left her embittered and resentful of others’ good fortunes; role will likely double with Sarah Good.

Sarah Good: a homeless woman and one of the first accused of witchcraft; eccentric, slovenly, and prone to inappropriate outbursts, her unbecoming behavior sets her apart from the rest of the community. She appears only briefly in the last scene.

Francis Nurse: (F/60-79/All Ethnicities) elder of Salem and the husband of Rebecca Nurse; an upstanding member of the community; honest and straightforward; when his wife is accused he comes to her aid and attempts to reason with the court for her release.

Rebecca Nurse: (F/60-79/All Ethnicities) Francis Nurse’s wife and an elder of the Salem community. Pious, kind, patient and virtuous; her age, combined with the respect she has earned from the community, has made her unafraid to voice her opinions; appalled by the behavior of the court, she stands solidly in the path of the tidal wave of fear, hatred and bigotry until it engulfs her.

Mary Warren: (F/16-25/All Ethnicities) A timid 17-year-old servant in the Proctor household and a member of Abigail’s group of girls. Easily influenced by those around her, she tries unsuccessfully to expose the hoax, but is thwarted by Abigail and the other girls. In order to save herself from their accusations of witchcraft, Mary ultimately recants her confession and turns on John Proctor.

All those auditioning must provide proof of full vaccination. All those auditioning are required to wear masks.
The Heights Players is located at 26 Willow Place, between State and Joralemon Streets in Brooklyn Heights. The Heights Players is a membership organization. There is no pay or stipend for any role or position. There is a $20 membership fee if cast.