Online Auditions for ABC Make Me a Star now open!

ABC is holding an online talent search called “ABC: Make Me A Star”. The competition is open to actors and comedians. 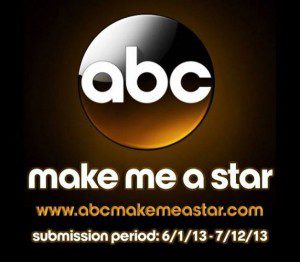 Do you have talent and are waiting to be discovered? ABC wants to give you a shot at impressing them and the public! There is no audition or casting to attend for this. You can audition online from the comfort of your own home by submitting a digital video of your performance.

ABC Make Me a Star is ABC’s first ever digital talent outreach contest that gives America’s undiscovered actors and comedians a chance to showcase their talent to the world.

ABC is looking for aspiring actors and comedians to submit a video of their acting or stand-up comedy performance. The video will have 2 parts an intro and a performance. Comedians will do a stand up routine while actors will do a monologue or something from a script. Stand up comics will need to do their own original material and actors will be given a part they will need to perform in the video.

The Make Me a Star contest will have 2 competitions. A public one where the public can vote on your performance and a private one where ABC employees or their affiliates pick a winner. Both competitions have their own prizes which consists of a talent agreement between ABC and the winner.

The competition runs June 1 2013 to July 12 2013 and all entries must be in by midnight July 12th.
ABC has created a website that will host the entries where the public can vote for their favorite performance. Voting will begin once all entries are in and run through mid August.

You can enter online at the ABC site.

You must be 18 or over to submit your video to the talent search and talent can only submit as either a comedian or an actor, but not both. ABC has created a submission process for this and the acting parts are available on their site.

The contest just began so talent has plenty of time to perfect their act and record the perfect performance.

3 thoughts on “ABC “Make Me a Star” Competition”