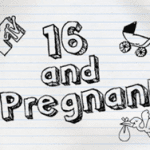 16 and Pregnant is is looking for newly pregnant teens who would like to share their stories with the MTV audience. The show follows the stories of pregnant teenage girls in high school dealing pregnancy. 16 and pregnant is shot in a documentary style that shows the stresses and hardships faced by the teen moms to be. MTV also has a spin-off of 16 and Pregnant which is called ‘Teen Mom’ that follows the stories of teenagers after they have given birth and deal with a whole new set of responsibilities that come with raising a child..

MTV is casting for the thought-provoking documentary series “16 and Pregnant.” This series follows the journeys of young women as they face unexpected pregnancies and navigate the difficulties of becoming parents at a young age.

Our goal is to give viewers a look inside the realities of teen pregnancy — from morning sickness and balancing school responsibilities to navigating incredibly difficult decisions and relationships with boyfriends and/or parents, ultimately to the day of the baby’s arrival and beyond. MTV is looking for young women from varying backgrounds who are facing an unplanned pregnancy and would like to share their personal story about this life-changing and complicated journey.

There is also another show right now that is casting pregnant ladies.