Update- There is still time to apply to be on “La Voz Kids” 2015. The open calls are now over but casting directors for the Spanish version of “The Voice” for kids is still taking submissions online and through email. Talented kids and their parents who are interested in applying for the show must get their submissions in ASAP as casting will be coming to a close shortly.

The Telemundo, Spanish language kids singing reality competition is coming back for season 3 and is looking for kids all over the US for talented, bilingual youngsters whose voice deserves to take the stage and presence can captivate an audience.

Telemundo and LA Bellatini Casting are looking for aspiring singers to become the next big star of La Voz Kids.

Telemundo is bringing back the kids singing competition, for another season to air in 2015 and we are accepting online auditions now.

La Voz Kids airs on Telemundo and is a Spanish language spin-off of the hugely popular show ‘The Voice’.

Auditions for La Voz Kids Season 3 are open to bilingual (English and Spanish) BOYS ages 7-15 that of course, can sing their hearts out!

Must be able to sing and speak in SPANISH and ENGLISH!

Please send a video link of the child singing a song along with a photo and parents name and contact number to lavoz3kidscasting@gmail.com

City or Location of call: Nationwide
Please submit to: lavoz3kidscasting@gmail.com

This casting notice was posted by: Isabel Reyes

There is also another casting notice that was issued by Casting Duo. You can also see the casting call flyer below for more information about submitting your child for “La Voz Kids” – We are still searching for amazing children between the ages of 7-15 for La Voz Kids! If your child can sing in Spanish and English and is conversational in Spanish, please email us TODAY . 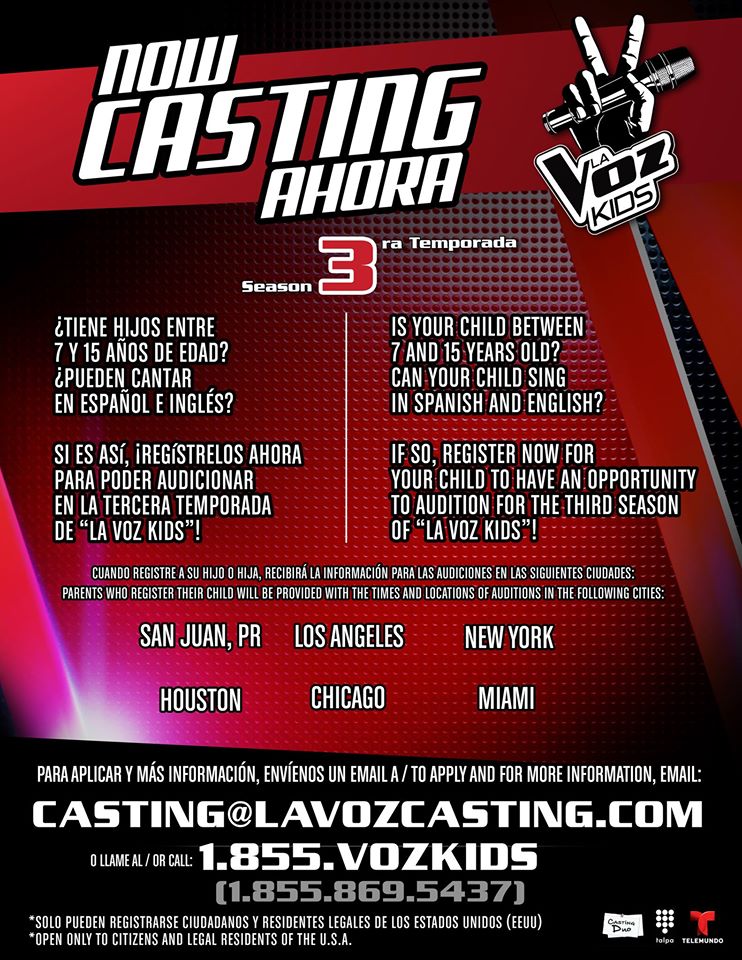