The show’s casting directors at Sande Alessi are seeking  union or non-union models who can portray ring girls for a scene that will be filming after the holidays in early 2015. The show is casting some “hot” ladies in the Los Angeles area.

“Faking It” is about Hester High in the suburbs of Austin where being different in high school is not such a bad thing after all, actually being different and standing out is quite popular. Karma Ashcroft (Katie Stevens) and Amy Raudenfeld (Rita Volk) have tried everything to stand out. Under the impression that they are closeted lesbians, Shane Harvey (Michael Willett) invites them to his high school party. The girls believe they finally joined the in crowd since everyone now believes they are lesbians. The pair keep up the charade to keep up their popularity and where even nominated homecoming queens. The charade gets a bit messy when one of the girls begins to like a boy… but still must keep up her charade at the same time, her friend may actually be developing feelings for her.

According to Deadline, MTV has ordered a second season that will consist of 10 episodes. Deadline also reports that Faking It is the highest-rated new series launch on MTV so far this year, averaging a 1.5 rating among the network’s target demographic of teens and young adults.

The below notice is only for people who live in the Los Angeles area. Please do not apply if you do not completely fit the specs or live outside the L.A. area.

SAG OR NON UNION CASTING NOTICE FOR RING GIRLS IN BIKINIS. Shoots on Thursday January 15th on “Faking It”. SAG RATE: 175/8 NON UNION RATE: 100/8 Shoots in Los Angeles. You must live in the So Cal area to work this show. 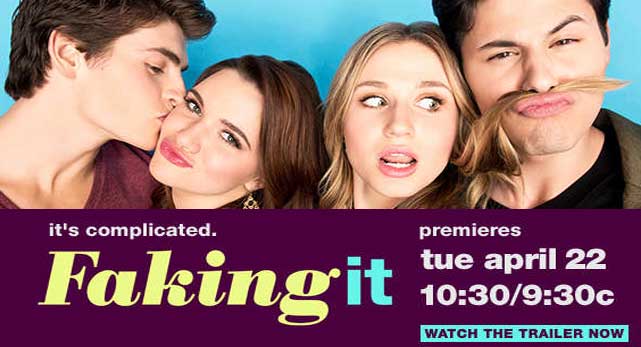 Check out the trailer for the series!