God Hates Musicals is not just a show. It’s a weapon.
Join us and fight hate with laughter!

David Phelps is questioning the hate-fuled belief system of his fundamentalist family when an outsider shakes up his life. The stakes are high as the impending Rapture looms and Steve Drain, a new comer to the church, comes up with a plan to save David. But can Steve be trusted?

About the creator, Joeseph Creedon – Joe Creedon is a graduate of Harvard University. He has studied at the American Reperatory Theater, The Annoyance Theater, and Chicago’s Second City. He is the creator several popular comedies including: Left Behind: Ragnarok, My Dark Love: A Twilight Parody and CAMP. He was the director of ImprovBoston’s Family Show for over a year, and is currently an instructor and producer for Fine Line Comedy. 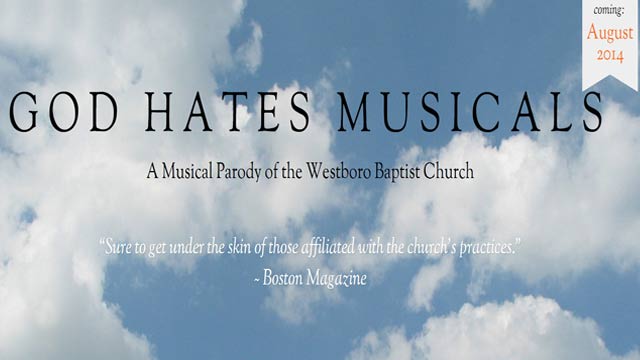 Want to be on the ground floor of a completely original new show and fight the WBC at the same time? We are looking for people of all ages, body types, and races. E-mail info@godhatesmusicals.org for more information.