On a cold, clear, moonless night in the middle of winter, all is not quite what it seems in the remote, mythical town of Almost, Maine. As the northern lights hover in the star-filled sky above, Almost’s residents find themselves falling in and out of love in unexpected and often hilarious ways. Knees are bruised.Hearts are broken. But the bruises heal, and the hearts mend — almost — in this delightful midwinter night’s dream.

Almost, Maine is an ensemble play about 9 different couples in various stages of falling in or out of love. In the original production, the nine couples were played by two female and two male actors. The number of actors in the MSJC production will not be determined until after auditions. We anticipate that we will cast between 6 and 16 actors and that some actors will play more than one role. Point of information: Several of the scenes will require the characters to kiss. 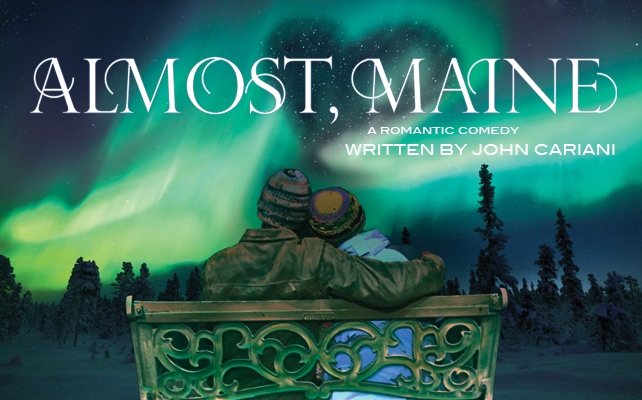 The Director is the Theater Department Chair and Broadway/West End performer, Shezwae Powell.
Everyone of college age and above is welcomed to audition. Auditions are open to MSJC students and the general public. The Department is also interested in hosting “guest artists” who have extensive experience. It is suggested that actors familiarize themselves with the script prior to attending an audition.
The production will also require a technical support crew. If you are interested in the technical side of the production and want to enroll as a student or become an official volunteer, please come to the audition.

AUDITION INFORMATION
DATES: Wednesday and Thursday, August 13th and 14th; call backs on Monday August 18th.
TIME: 6-8pm on 8/13 and 8/14; 6-9 pm on 8/18
WHERE: Mt San Jacinto College Theatre, San Jacinto Campus, 1500 Building, 1499 N. State Street, San Jacinto 92583.
WHAT: For the audition you should prepare a monologue that best shows your abilities in ‘character development’. Monologues should be no more than two minutes in length. You may also be asked to read from the script. Scripts will be provided.

Everyone who is cast in the production or a member of the stage crew must enroll as a student in the course THA 201, Rehearsal and Performance or in a special projects course. Some arrangements may be made for volunteers who cannot register.

The classes/rehearsals are Mon/Tues/Thurs evenings, 6 to 8:50pm starting 1/22/14. How often you are called will depend on your role(s). There will be 6 weekend public performances starting on 10/17/14. There will be some additional rehearsals just prior to the performances and a tech rehearsal on Sunday 10/12/14. We are looking for committed team players.

City or Location of call: San Jacinto, California
Please submit to: by