Coming next fall to Telemundo is the singing competition series “Yo Soy El Artista“!

Telemundo is looking to make somebody a star!

If you believe you were born to sing and entertain the audience from atop a stage, here is a shot at the big time. “Yo Soy El Artista” is looking for the next huge spanish language music superstar.

The show is looking for people who are the full package… a true performer and artist!

Telemundo Media proudly announces the national castings for the most innovative music competition, “Yo Soy El Artista” (I Am The Artist), have begun taking place in Los Angeles, New York, Miami, Houston, Chicago, Orlando and Puerto Rico. This new reality show set to premiere in the fall, is more than any other music competition on television since it’s about discovering the ultimate artist, a star who can sing, dance, perform and captivate audiences.

Yo Soy El Artista is a new reality television from Telemundo. The series is casting triple-threats… singer/dancer/actor, to compete on a national stage on a TV series that will be televised all over the world.

The show is not just looking for people who have a great voice, but they also have to be great performers, dancers and have real stage presence. Does that sound like you? 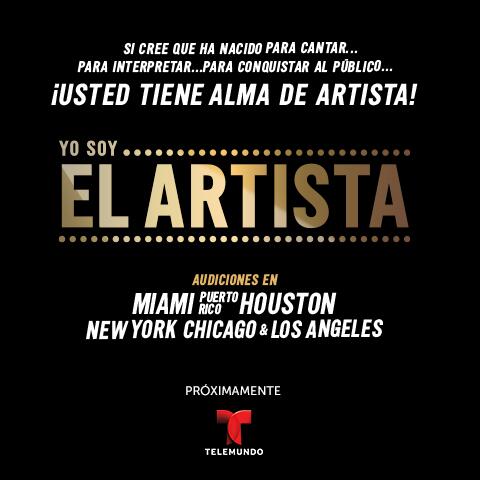 A series of auditions will be held in six of the most musically-talented locations in the country; Puerto Rico, Miami, Houston, New York, Chicago, and Los Angeles.

This weekend, the show’s casting directors will be in Orlando and performers ages 16 and older can come down and audition for the chance to be discovered. This is a Spanish language program so all applicants must be bi-lingual in English and Spanish.

To audition, candidates must be 15 years of age before August 1, 2014 and be a U.S. citizen, permanent U.S. legal resident or have temporary employment status authorized by the United States Immigration Service with the unrestricted right to work for any employer in the United States.

Check out the Spanish language teaser for the show which will premiere in the fall!