February 5, 2015-AUDITIONS FOR SHORT FILM ROLE-PAID OPPORTUNITY
“A Favor” is a short film that will be shooting in the Tampa Bay area the weekend of April 24th-26th, 2015.

The film is a dark comedy dealing with the sensitive topic of assisted suicide. Diane, a quirky woman nearing the end of her life due to a crippling illness, asks to meet with Lauren, a young 20-something working a dead end job. When Diane’s true intentions are revealed Lauren is left with a life ending decision.

Auditions will be held to select a non-union actor to play the role of Diane. The actor selected must be able to play mid-late 60’s with a lot of energy and be very charismatic. The actor that is cast will receive a stipend for the three days of shooting, and must be available the entire weekend of April 24-26th, 2015. The role of Lauren is already cast.

Auditions will be held Thursday February 5th from 7-11pm with possible callbacks Sunday February 8th in the afternoon. Email headshot and resume to afavorthemovie@gmail.com to reserve an audition appointment, receive sides, and for location details.

This casting notice was posted by: Morgan Dixon 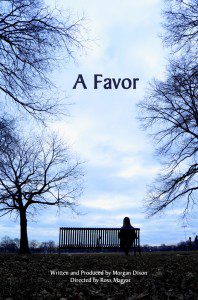