This bold adaptation features your favorite characters as well as new strong women leads! The sweeping saga respectfully holds to its roots while pushing the story into a vibrant collage of energy, danger and swashbuckling on stage. Actors of all genders from the age of 13-120 are encouraged to step into a lively tale of Long John Silver and Jim Hawkins that inspired Hollywood before anyone ever knew the name of Jack Sparrow.

Not a musical but traditional shanties transition scene to scene. No singing experience required. Directed by Nationally Recognized stage combat instructor (DAI) and licensed Tall Ship Captain Orion Couling. The show features a diverse cast of many age ranges and stays true to character as portrayed in the book.

Held by appointment on Wednesday & Thursday December 2 & 3 2015 / 6-10 p.m. at The Devonshire Cultural Center. Actors should prepare a 60 second reading of their favorite adventure book in a dialect from the British Isles. The cutting should show range and character.

This could include anything from Huck Finn to Divergent, Ender’s Game to Harry Potter. To schedule an audition appointment, please send your headshot and resume, as well as the date that works best for you between December 2nd and December 3rd to Orion Couling at treasureisland8@gmail.com. You may also request an audition packet which will give further details as to character breakdown and time commitment. 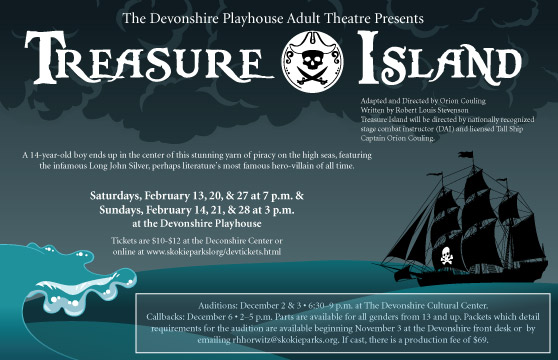 Callbacks: Callbacks will be Sunday Dec. 6 / 2-5 p.m. and will consist of readings from the show as well as a small fight call.

City or Location of call: Chicago, IL
Please submit to: treasureisland8@gmail.com by

This casting notice was posted by: Skokie’s Devonshire Playhouse