“Gunslingers” will be coming back for a second season and is now in production in the NM area.

The show which films around the Santa Fe, NM area airs on the American Heroes Channel and documents the old west cowboys whose names we have all grown up with. The show’s casting directors at Midthunder Casting are seeking to fill 2 roles… A Caucasian singer in her 20’s to 30’s to play Dora Hall, a performer who lived during the late 1800’s and the role of a teen boy named Jim Miller who was a young outlay. The teen boy role is seeking an adult actor, 18+ who looks younger. Ideally, they are seeking an actor in his early 20’s who still looks like he is in his late teens.

Gunslingers, Season 2 is a non-union miniseries. The show is directed by Chris Cassel and produced by Castle Pictures and  Paul O’Brien. 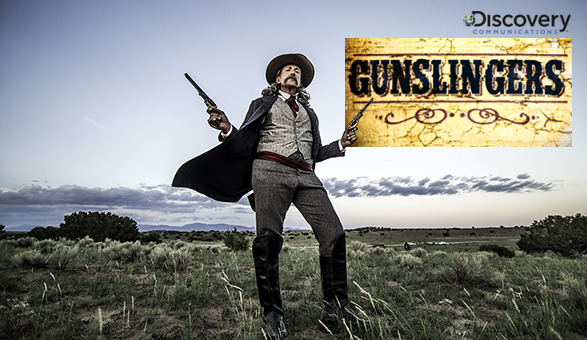 Interested? follow the below instructions to throw your name into the hat… so to speak. Please note that they are only considering talent local to the New Mexico area.

Rate: $125 per shoot day
Shoot dates: Sometime between March 16 – April 10 (do not submit if you are not available for these days)
Shoot location: Santa Fe, New Mexico

To submit (ASAP):
Send the following to: info@midthundercasting.com

Two photos: one headshot and one full body (does not have to be professional)
Photos must be under 1MB
If you are submitting for the Female Singer, please include video (under 5MB – otherwise, send through Dropbox, Hightail, YouTube…) of you performing/singing and your resume/training/experience.
If you are submitting for the Teen Boy Horseback Rider, please include any photos/resume/experience of your horseback riding skills and weapons experience/training.