The Two Musketeers! by Jon Jory

Trinity Theatre Company is holding auditions for the September 2016 production of:

The Two Musketeers! by Jon Jory. Directed by Sean Boyd.

When a small acting company eliminates one Musketeer from their production of The Three Musketeers due to budget constraints, the rest of the cast must sally forth bravely with only two. The classic tale of d’Artagnan and his sword-fighting friends is presented by a hilariously self-aware cast of six, with romance, wit, and derring-do to spare. This low-tech, high-comedy adaptation is a witty send-up of Alexandre Dumas’ beloved adventure.

Auditions will be held on July 11th from 6:00pm-9:00pm. Location will be sent on confirmation.

To schedule an audition appointment, email TrinityTheatreCompany@gmail.com. Include:
1) Your name
2) Your email & phone number
3) Time preference for a five-minute appointment
4) Digital copy of your headshot and resume.

Please prepare a 1-minute contemporary monologue. Bring a hard copy of your headshot and resume at the audition. Walk-ins will be seen as time permits. Bring all conflicts for July 27, 2016 – September 18, 2016 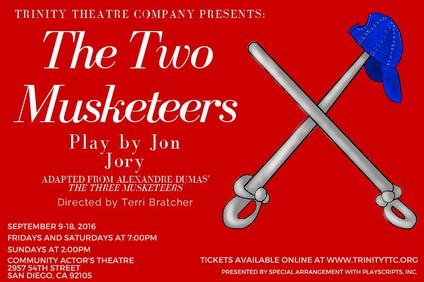 City or Location of call: San Diego, California
Please submit to: TrinityTheatreCompany@gmail.com by 2016-07-11

This casting notice was posted by: Trinity Theatre Company