“The Comedian” feature film is looking to cast a wedding band.

Jennifer Aniston co-stars with Robert De Niro in Taylor Hackford upcoming drama “The Comedian.” The movie is now filming in the NYC area and needs a REAL wedding band for a scene that will be filming shortly. GWC in NY is looking for a 4 to 5 piece band that has 1 or 2 singers. The band will be performing in the movie and will need to perform some wedding staples. The scene will be filming in early March.

“The Comedian” is written by Art Linson along with comic Jeffrey Ross, Lewis Friedman and Richard LaGravenese. According to Deadline, Robert De Niro will play a toxic insult comic… think Don Rickles (with whom De Niro starred in Casino).  De Niro meets Jennifer Aniston at this wedding (probably the one they need the band for). The pair will then develop a friendship. This is not De Niro’s 1st time playing a comic, he also played the comedian Rupert Pupkin in The King Of Comedy. The movie is being produced by Art Linson and has worked with De Niro on quite a few projects including What Just Happened?, Heat, The Untouchables and This Boy’s Life.   Taylor Hackford is directing the project and a release date does not seem to be yet available. IMDB  has a brief description of the film which simply states ” A look at the life of an aging insult comic.” Also named in the cast are Leslie Mann and Edie Falco. 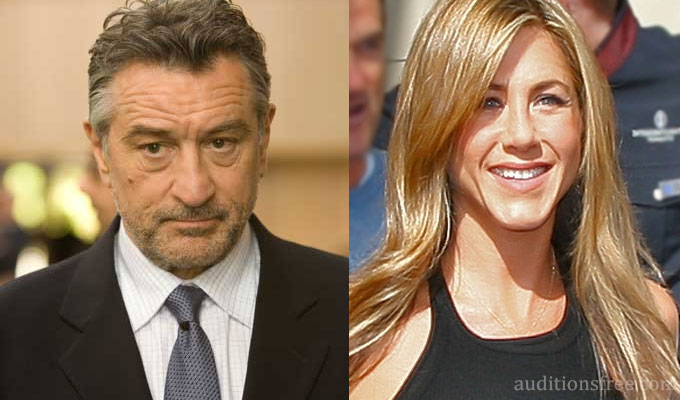 Specifically seeking a 4-5 piece band with 1-2 singers that can perform the Hora and other wedding staples such as “Don’t Stop Believing,” etc.

Please email comedian@gwcnyc.com and include:
-name of band
-main contact person & phone number
-recent photos of band
-links to videos/recordings/performances
-please note union statuses (SAGAFTRA or non-union) of all band members
-what instruments are included and names of each player
-availability for March 2nd & 3rd
-confirm band knows and can perform songs noted above

Everyone MUST be 18 or older and have 2 valid forms of US issued ID to fill out an I-9.