The Welk Resort Theatre is currently taking video submissions for the casting of the 2016, non-Equity production of Million Dollar Quartet, the award winning Broadway musical.

“Million Dollar Quartet”  is a recording of an impromptu jam session involving Elvis Presley, Jerry Lee Lewis, Carl Perkins, and Johnny Cash made on December 4, 1956, at the Sun Record Studios in Memphis, Tennessee. Since then, a musical play has been produced that brings those musical legends to the stage.

The stage musical was written by Floyd Mutrux and Colin Escott. The stage play / musical dramatizes the Million Dollar Quartet session and it premiered at Florida’s Seaside Music Theatre followed by other theater premieres some of which broke box office records. The show was also produced at Chicago’s Apollo Theater where it opened on October 31, 2008. In 2010, “Million Dollar Quartet” opened on Broadway.

The Show will run March through December 2016. 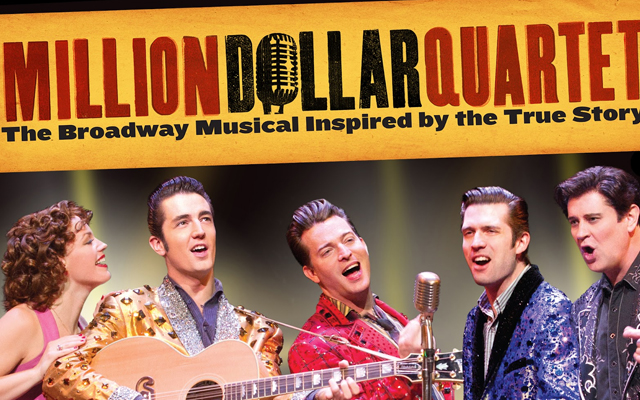 Casting is underway for the following characters:

Johnny Cash– male, age 26 – must play guitar and sing. A giant of American Music at the beginning of his career. Vocal range: bari/bass.

Please submit a link or email a small file (less than 10mb) of your audition to:
ccathcart@welkgroup.com

Please use Subject Heading: MDQ AUDITION VIDEO. All questions can be submitted through email at the same address.