If you have been looking for a way to tryout for a role in a Disney movie, you may have a shot because Disney is casting for lead roles.

Update – Seems that Disney is still looking for talent to fill the lead roles of Jasmine and Aladdin.  If you have not yet submit for the roles, you have a chance to still be considered as the deadline seems to have been extended. Please see below for the updated Disney audition information.

Auditions announced for Disney Pictures live action Aladdin remake. That’s right, Disney is working on a new adaptation of the popular Aladdin story and there is a casting call out for the 2 lead roles in Aladdin, princess Jasmine and Aladdin. Casting directors are now taking submissions for the 2 lead roles and seeking actors, actually triple threats, that are between the ages of 18 and 25 to fill the starring roles. Disney casting directors are accepting online / video auditions and requesting talent interested send in a video of themselves singing.

Guy Ritchie will be helming the new Disney project and the movie is looking for fresh, undiscovered talent to take on the starring roles. The casting notice goes on to say that  rehearsals will begin next month and the movie will be filming in the UK.

Disney originally released Aladdin in 1992 as an animated film. Disney’s 1992 Aladdin movie was directed by John Musker and Ron Clements. The previous animated film was based on the story of “Aladdin and the magic lamp from One Thousand and One Nights” which was set in the Arab world. The story was a rags to riches tale where the hero, a poor, street kid named Aladdin sweeps a princess off her feet. Aladdin, described as a street urchin, spends his days stealing food in the marketplace. One day he meets a princess who is not all too happy about her upcoming arranged marriage to her father’s evil adviser, Jafar. Jafar has his eyes on the throne and needs the princess to solidify his position. Aladdin finds himself head over heels for Princess Jasmine and luckily finds a magic lamp….with a genie inside, to help him get the girl. But, Jafar has other plans, one of which is getting his hands on that magic lamp. 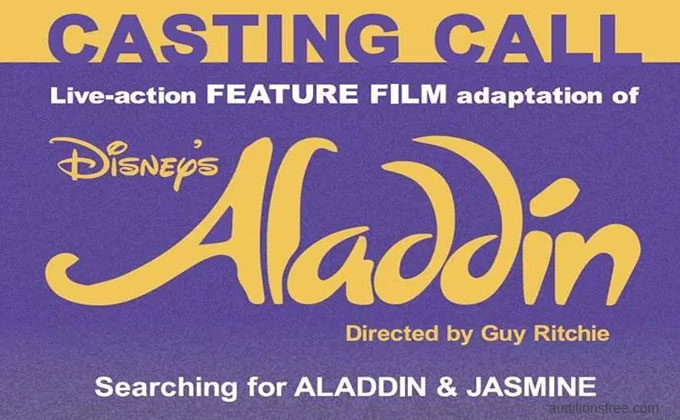 While the casting notice does not specify a particular ethnicity for either the Aladdin or Princess Jasmine roles, Vanity Fair did have a story about the upcoming Aladdin movie casting. According to the Vanity Fair piece, the studio will not be “white washing” the new Disney movie. The VF story states that…. The studio knows that viewers are concerned about potential whitewashing and will definitely not be anything like Prince of Persia. Prince of Persia starred Jake Gyllenhaal as, well, a Persian. That movie didn’t do great at the box office and failed with critics as well, so, seems this Persia set film may have a much more diverse cast.

The Vanity Fair story included comments from Aladdin producer Dan Lin. Lin seems to have hinted at looking for some fresh talent on this project and went on to say “We’re going to be discovering new people, because it’s a real challenge—because not only does an actor have to act, but they really have to have singing chops.” Lin went on to add “

The casting notice seems to be a little light on the character descriptions, in terms of looks and etthnicity. It may be that Disney Studios is in fact open to the ethnicities of both Aladdin and Jasmine. In the mean time, actors interested in the roles may follow the directions on the casting call notice below to get their info to the casting team. 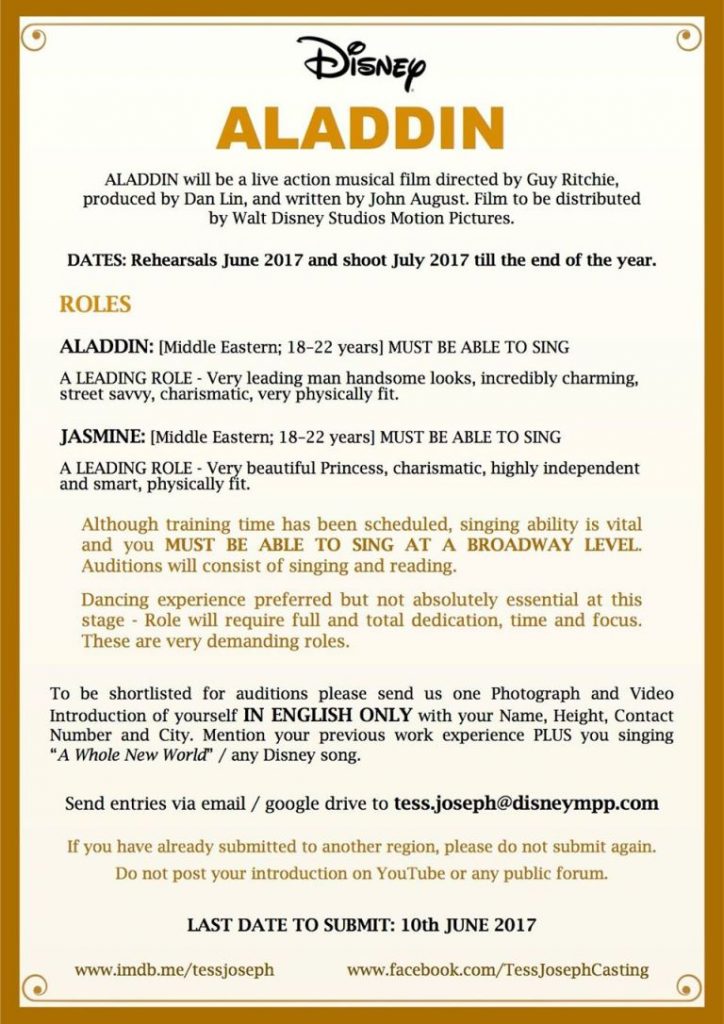 6 thoughts on “Auditions for Lead Roles in Disney Movie “Aladdin””