Three7productions is looking for some original, authentic, trustworthy, genuine, honest and Godly individuals to fill the roles of the cast of the company’s first upcoming musical stage production Entitled: Kandee’s Kloset which is set to debut December 2019.
Need to cast about 12 more people before MARCH 31st. This will be held in Montevallo, Alabama so please be local or willing to travel.

About the production…
Kandee’s Kloset is based on a family who seems to be perfect to the outside world. Everyone envies this family because they have the finer things in life. They have the nicer things in life and they seem to be perfect but things are just never what they seem.
The family is about to fall victim to the devils prey but the devil will have to put up a fight because “Grandma Ima” will not stand back and watch her family fall to pieces. The production’s moral is also about how people and how society pressure and judge people based off of what they see. You may never know what a person is or was dealing with unless you walk in their shoes so it’s important to be kind and accept people for what and who they are. Kandee’s Kloset has many messages which are intended for many audiences but the overall message is to be yourself and walk your truth. If you’ve never heard anything unique about yourself, just know that no one else could ever be you and that’s as unique as it comes. 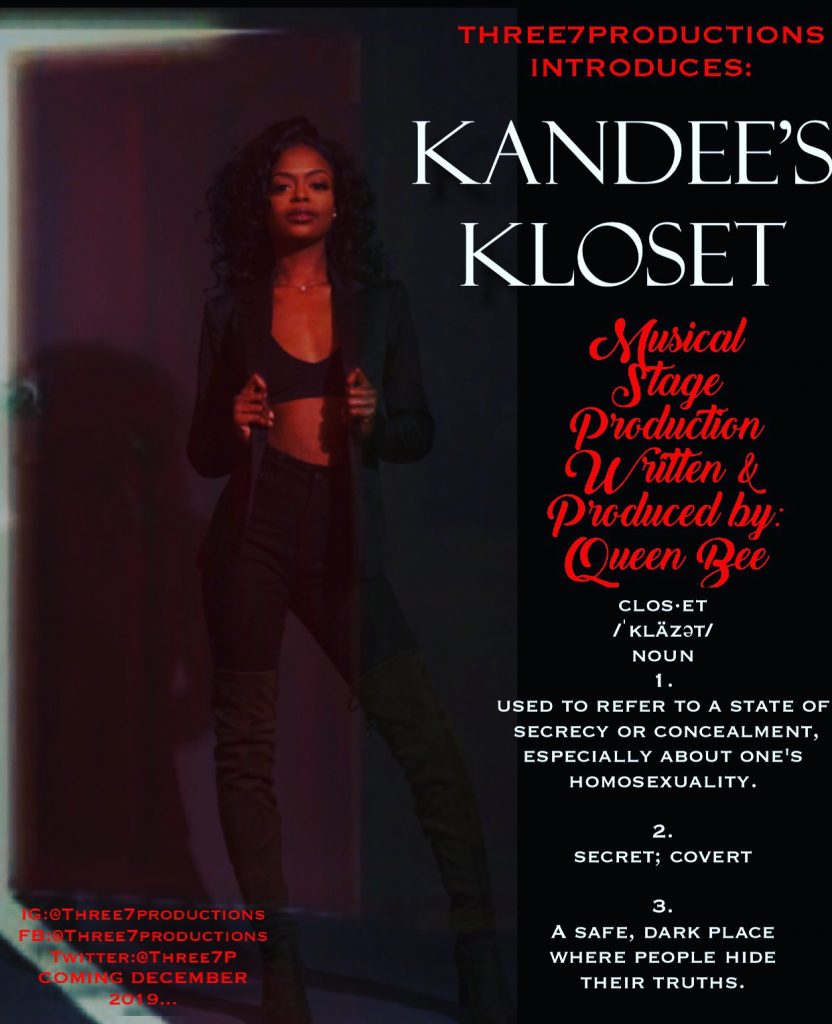 Sereniti Porter- (Black/mix female) she younger and more reserved sister. She’s sassy and spicey and will soon find another part of her self that she never knew. She’s not the one that likes to overstep boundaries or test the waters. Very sarcastic and this character’s age is 16. Very overprotective over her older sister Kandee.

Alisha Porter- (Black/ mix/ white female), the mother of Kandee and Sereniti and wife to Johnny Porter. Alisha is quiet but when she does talk she makes a lot of noise. Alisha is feisty, fierce, understanding, passive and nice but those young children of hers are really trying her. She just may lose her patience. This character age is around the age of 35-38.

Johnny Porter- (Black or mixed race) the father of Kandee and Sereniti and he is the husband to Alisha. Johnny is a womanizer and he is really arrogant. He thinks of himself as more than those around him. Doesn’t really pay attention to his family because he is living a double life. This character is around the age 37-42.

Kenyan Carter- (Black male) young, nice, preppy, flashy and gorgeous boyfriend of Kandee. He is in college playing ball and is said to be a promising athlete. He loves his girlfriend very much and does whatever it takes to keep her happy. Kenyan is lovable and charming and most of the girls wish they could get his attention. This character’s age is around 19-21.

Kamari Carter- (Black make) Kenyan’s older brother. He’s simply the big brother that taught the little brother how to be the best at everything and he is very overprotective. Big supporter of his little brothers accomplishments. This character’s age is in his 20s.

Eric Carter- (Black male) Kenyan and Kamari’s dad. Godly and reserved. Helpful and is understanding. His faith will move mountains. This character is an older guy.

Marlee Wilson- (Light skin or mix race) this is Alisha’s brother whom their mother favor. He and his sister Alisha are not the best of friends because of things that took place in the last but he comes back for a visit. He’s a snake, he is selfish and is only out for things that benefit him. This character age is late 30s early 40s.

Grandma Ina- (Biracial/ Black ) (the Matriarch of the family. She’s the well respected. She is godly and god-fearing and is big on the dealings her children and grandchildren have with the Lord. Strong independent woman who stands firms on what she believes and is determined to give her family a shot.

Alize Norway- (light skin) Alisha’s mother. She was never a real mother to Alisha but things have changed and blown her into the direction of her daughter that she neglected. Alisha is feisty but passive, sarcastic but true. This character is older.

If you would like to submit to this casting call, email Three7productions@gmail.com and include your name, valid email, location and a picture. In the subject bar include the character in which you are auditioning fo

City or Location of call: Montevallo, Al
Please submit to: Three7productions@gmail.com by 2019-03-31

This casting notice was posted by: B.Fitts