If interested please email Headshot and Bio/Resume to the email provided ASAP. Thank you!

Actor Specs: African American girl, to play 5 yr old
Keisha: 5-year-old Black girl; very innocent and happy child despite the obvious neglect of her mother. She is dependent on her older brother to insure her safety.

?Actor Specs: African American teen male, to play 15 yr old
Young Ricky: 15-year-old, Black teenage boy; has been responsible for the safety of both his mother and younger sister for years. Although rough around the edges, his relationship with his sister reveals his gentle, caring nature and obligation to protecting his loved ones.

Actor Specs: African American male, to play male in his 30s
James: 34-year-old, Black man; has been hardened by years of imprisonment and has little faith in the justice system. His new identity as James, instead of Ricky, marks his transition from a

Actor Specs: African American female, to play female in early 20s
Tabatha: 25-year-old, Black woman; very intelligent and accomplished young lawyer who, despite graduating at the top of her class, has chosen to first practice criminal law as a public defender. Her first case is to defend James, whom she initially pegs as a thoughtless criminal.

Actor Specs: African American female, to play female between 40-50 yrs
Mother: Black woman, appears to audience in her early to mid-50s; humbled by life, her drug addiction greatly affected her relationship with her children.

City or Location of call: Houston, TX
Please submit to: arielasjohnson@gmail.com by 2019-03-30

This casting notice was posted by: Houston Play On Purpose 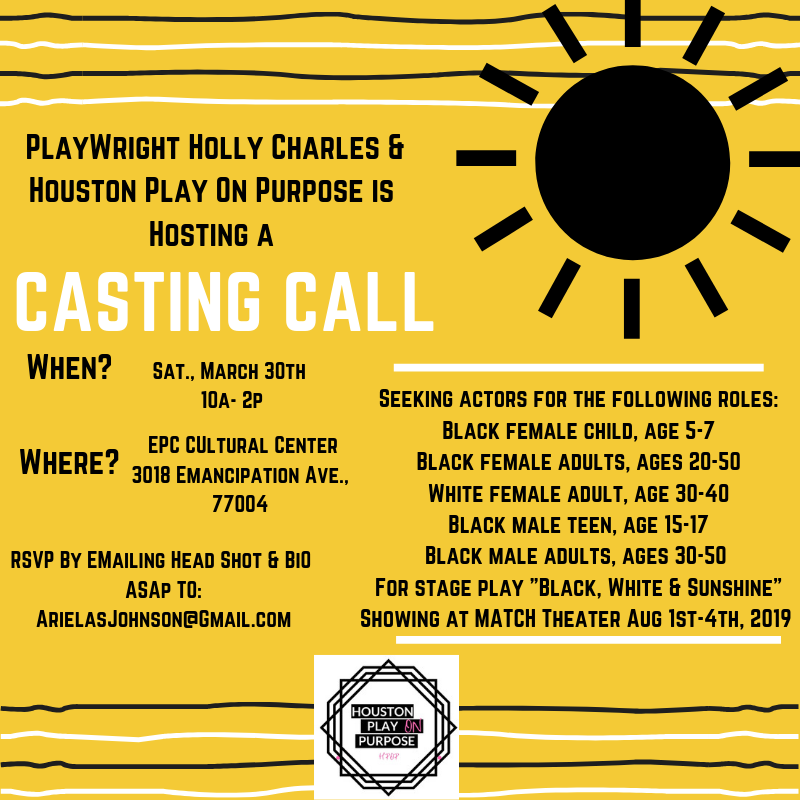