Do you have a child who loves film, loves talking about film and loves to be on-camera? If so, we have a program for you – the national, KIDS FIRST! Film Critics, a project of the national, nonprofit, 28-year- old Coalition for Quality Children’s Media.

KIDS FIRST! will be holding auditions at the Arapahoe-Centennial Meeting & Conference Center, 12065 E. Euclid Dr., Centennial, CO 80111 on Tuesday, March 12, 2019 from 4:15 to 6:15. The auditions are open to any child between the age of 9 and 18. To audition, you must register online no later than March 10, 2019. Go to https://goo.gl/forms/ZHONkjFssU8qWqmP2 to register. You must be registered in order to audition.

As part of your Audition Registration, you will need to include a sample written review of any film, DVD, TV show or web series released in the last 6 months, rated PG-13 or younger. Auditions are limited to 30 children and special consideration is given to youth that are bilingual in Spanish and English.

“We are looking forward to discovering hidden talent in Denver this spring,” comments Ranny Levy, President, KIDS FIRST! “We have a long history of recruiting youth reporters from the Denver area and have taught boot camps here at various venues.

Participation in the KIDS FIRST! Film Critics program is voluntary. None of the reporters are paid. However, the program offers youth a unique opportunity to attend press screenings, press junkets and red carpets, learn to review films, present themselves on-camera and interview celebrities. 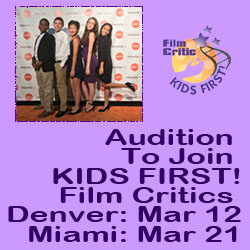 From Los Angeles, Gerry O.’s (age 16) mom comments, “This program not only teaches kids how to be better communicators, more pleasant company and knowledgeable movie gurus, it gives them so much more. These kids will be able to socialize and speak properly, write great essays, participate intelligently in debates and become confident leaders. My son was invited to present some of his film ideas to Morgan Freeman’s production team after interviewing Freeman on the red carpet three times in a period of six weeks. He has completed over 200 reviews and taken numerous workshop at YouTube Space LA, representing KIDS FIRST! as one of a small number of channels accepted. He has interviewed many industry greats including Brad Bird, Morgan Freeman, Ty Burrell, George Clooney, Britt Robertson, Zoe Saldana, John Ratzenberger, Tara Strong and many more.

This casting notice was posted by: Ranny Levy, KIDS FIRST!