OPEN CALL. NO NEED FOR APPOINTMENT.

NORMAN AND ETHEL ARE PRECAST

On Golden Pond is a 1979 play by which focuses on aging couple Ethel and Norman Thayer, who spend each summer at their home on a lake challed Golden Pond. During the year the story takes place, they are visited by daughter Chelsea with her fiancé Billy Ray and his son Billy Ray Jr. The play explores the often turbulent relationship the young woman shared with her father growing up, and the difficulties faced by a couple in the twilight years of a long marriage.
Show Dates: October 11, 2019 to
November 10, 2019
Fridays & Saturdays at 8:00pm
Sundays at 2:00pm
Auditions will comprise of reads from
sides available at the audition.
RESUME AND HEAD-SHOT REQUIRED.
A tentative rehearsal schedule will be posted. 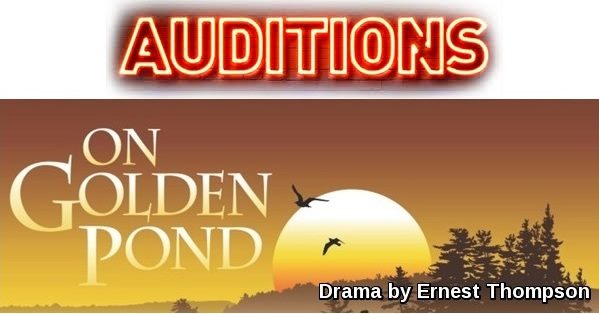 Character Descriptions:
The ages listed for the characters are those actually stated in the play’s dialog, however, actors auditioning for these roles can be younger or older than the stated age.:
***NORMAN & ETHEL ARE PRE-CAST***
Chelsea – (42) A bright, capable, divorced woman, still hurting from her regret of not having lived up to Norman’s expectations which he, of course, engendered but which she should have let go of long ago.
Bill Ray – (45) A successful Los Angeles dentist who is initially unnerved by Norman but ultimately gains his respect by standing his ground.
Billy Ray – (13/teenager or looks like it) Bill’s son who, underneath a cool/tough front is really in need and responds enthusiastically to the love and attention he receives from Ethel and Norman.
Charlie Martin – (44) The local mailman and childhood friend of Chelsea who has always had a crush on her. His laugh is contagious albeit used a little too often.
There will be no callbacks. ALL will be notified via email of the results of your audition within one week.
Please review the available slots below and click on the button to sign up. Hope to see you there!
Thank you!

If you have any questions or need additional information please contact, George Bailey at cageomdgeo@yahoo.com

City or Location of call: San Diego
Please submit to: cageomdgeo@yahoo.com by 2019-08-03

This casting notice was posted by: George Bailey – Lamplighters