New Channel MC WANTED! – Be a YouTuber with 1.3M subscribers from today!

In February of 2013, WAORYU! TV ONLY in JAPAN was born to introduce areas and culture of Japan
Amazing Japanese food and tradition was introduced through eyes of foreigners in a high-quality documentary style. Many great things about Japan, in which even Japanese people did not know were introduced.

In the year 2012 when the channel started, more than 10million foreign tourists came to Japan. In 2016 the number passed 20 million, and in 2019 the number reached 31.88 million. As the number of foreign visitors to Japan grew, and with many more people interested in Japan, WAO RYU! ONLY in JAPAN became one of the biggest channels in YouTube to introduce and show what Japan is about.

With the 2021 Tokyo Olympic and the 2025 Osaka Expo on its way, the Japanese government aims for 60million foreign tourists to Japan by the year 2030. From pack tours to individual tours. From one- time-only-travelers to loyal repeaters. As the number of foreign tourists and YouTuber viewers grow, the market and the viewer demographics change and the viewers’ demand for WAO RYU! ONLY in JAPAN has been evolving.

WAO RYU! ONLY in JAPAN sees this as a second wave of evolution and has decided to renew the channel to meet those demands. More information on what you cannot find in a few days tourist visit will be introduced in much more depth! As with this renewal, we will hold an audition to bring in a new main host to the channel. We are auditioning from our wide viewers around the world whom will be willing to make a buzz in Japan.

City or Location of call: Tokyo, Japan
Please submit to: kazutaka_arima@wao-corp.com by 2020-07-31
Apply through the application form, prepare a self-promotion video for about a minute and upload it to your vimeo or YouTube channel (or already published one) and attach its URL.

This casting notice was posted by: WAO Corpration, Inc. 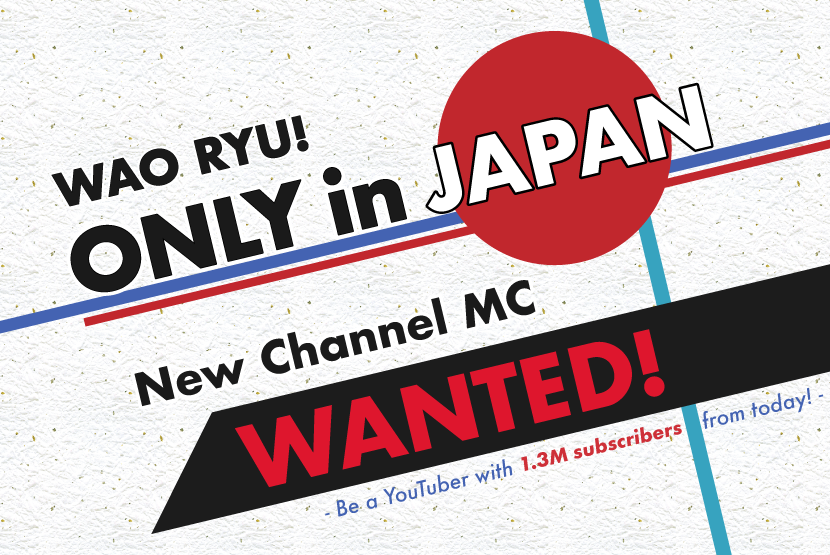