Grausam – Horror Feature Film
This notice was posted on auditionsfree.com

Details: A Jewish couple is entrusted to care for a dying old man discharged from a mental hospital, but when they find themselves tormented by evil spirits who are trying to force them out of the house, they soon come to realize that things are not as they appear and there something horribly evil about the old man.

After suffering through the death of their newborn baby, Becky and Josh Cohen move away from the big city to a small isolated town. Entrusted by their friend to care for Mr. Krauf, a dying old man in his final days, the couple move into his home. They soon begin to experience paranormal attacks and realize that the house is haunted by evil spirits. The attacks quickly intensify, and one-by-one, everyone around them dies mysteriously. The couple soon realize that there is something terribly wrong with Mr. Krauf.

This is a casting call for nonunion actors/actresses for a horror feature film shot in Fort Wayne, IN. This is a PAID PROJECT for LEADS and SUPPORTING ROLES. Extras will get IMDB credits and invitation to the film’s premiere in New York City or local screenings in Fort Wayne, IN.

Shooting begins December 1st and ends December 22nd, with several pick up shots for leads after the holidays. The film will be released to theaters on Halloween, 2013. EVERYONE receives an IMDB credit. The film will be shot primarily in Fort Wayne, IN.

Mr. Krauf (LEAD)
Scary old man restricted to the use of his wheelchair. Portraying a 103 year old German man. Must be able to pull-off intense facial expressions. Ability to speak German is a plus.

The Rabbi
A mysterious rabbi spirit. Knowledge in Hebrew or Yiddish is a plus.

Farmhouse Wife
Beautiful girl with long flowing hair, nudity required for this character for a brutal murder scene. And then again for the revenge scene.
Females, aged 20 to 30 from Indiana, United States(nudity will be required)

Males, aged 20 to 30 from Indiana, United States(nudity may be required) 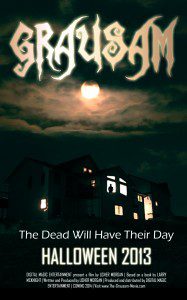