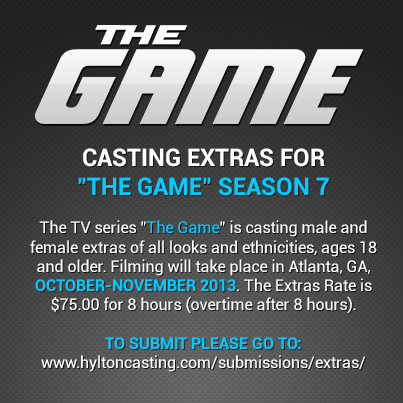 Extras casting update: more extras are needed on the set of “The Game” which is filming in Atlanta this month.

TV BET Series “The Game” is a spin-off of “Girlfriends” featuring a group of women who all have relationships with professional football players. The show stars Wendy Raquel Robinson, Hosea Chanchez, and Coby Bell.

“The Game” originally premiered on the CW channel in 2006, later, BET picked up the show and renewed it. The Game has been renewed for a seventh season that is set to premiere in 2014.

The TV series “The Game” is casting male and female extras all looks and ethnicities ages 18 and older.
Filming will take place in Atlanta, GA, October-November 2013. The Extras Rate is $75.00 for 8 hours (overtime after 8 hours).

Hylton casting released the following casting call for extras:
The role of being an Extra is an exciting opportunity to gain experience on set. It requires a full commitment of both time and professionalism, as with any job. It is imperative that you exhibit professionalism and respect towards those working around you while on set.
Please note, if you are selected to work as an extra, you must have a valid Government issued ID with proof of age. You must be legal to work in the US to be an extra.

For filming Saturday, 11/16/13 in hospital scenes on the television series “The Game” Season 7″, we are casting:

-Males and Females
-All ethnicities
-Ages 18 and older

You can check the following link for submission instructions and more information.

To submit, please go to HyltonCasting.com, click on the label Submissions and select Extras. Please list “Hospital 11/16” in the Special Skills or Talent box.