Warner Bros. new film “Our Brand is Crisis” is about to begin production in Louisiana.

Sandra Bullock (‘Gravity‘) will be starring in a George Clooney produced political comedy. The Warner Bros. project will be filming in the NOLA area this fall and casting directors at Central are holding an open casting call for paid background extras.

‘Our Brand is Crisis‘ is based on the 2005 documentary which has the same name. The film will be about American politics in South America and how U.S. strategists attempt to mold the opinions and course of elections in South America through smear campaigns and other underhanded tactics.  According to IMDB, also producing the project are Sandra Bullock and Grant Heslov.

Filmmaker Rachel Boynton, created the original documentary in 2005. The film followed a consulting firm called Greenberg Carville Shrum and their work on a campaign in South America. The firm was helping with the election campaign of Gonzalo Sanchez de Lozada which went sideways. Gonzalo Sanchez de Lozada also called “Goni” had been President a decade back and oversaw the privatization of Bolivia’s economy which sold off national assets to private companies. With his popularity waning, the campaign becomes focused on negatives to try to undermine the competition. 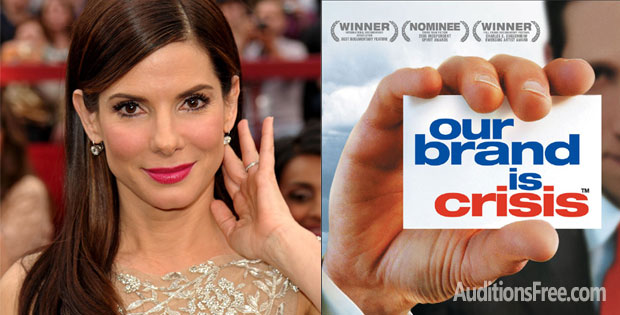 We are now looking for people to portray Bolivian’s in the upcoming feature, “Our Brand is Crisis.” Specifically looking for Hispanic and Native American looking people of all ages. We will be casting numerous spots working at different times throughout September, October & November and we will be submitting pictures soon for featured roles.

See the attached flyer for our open call on the Northshore. We will also be holding registrations in the Westbank, Eastbank and Baton Rouge areas on TBD dates.

Stay tuned for dates and times of our other registration sessions. Please spread the word to everyone you know that may fit (friends, parents, grandparents)!

Central Casting in Louisiana will be handling all the extras. They are looking for lots of extras who can pass as being South American.

They are casting men and women of all ages. An open casting call is scheduled for the 3rd of next month in Slidell, LA.

Please see the below casting flyer for further information about the open call and what to bring with you if attending.

Please direct any questions to: Louisianainfo@centralcasting.com 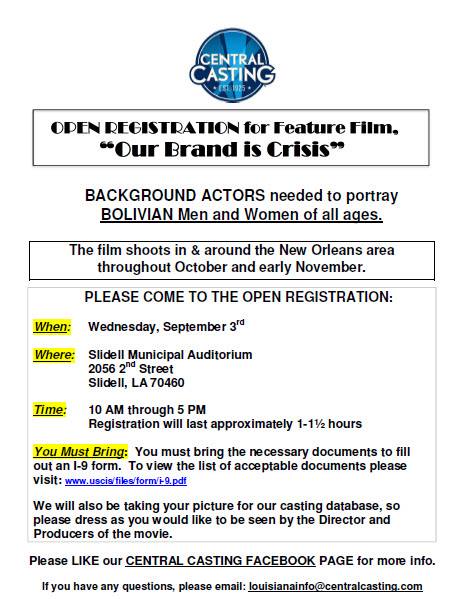 For decades, U.S. strategists-for-hire have been quietly molding the opinions of voters and the messages of candidates in elections from the Middle East to the South American jungle. With flabbergasting access to think sessions, media training and the making of smear campaigns, we watch how the consultants’ marketing strategies shape the relationship between a leader and his people. Our Brand is Crisis is an astounding look at one group’s campaign to elect the President of Bolivia and its earth-shattering aftermath.