If you are not really a member of an exclusive country club, here is the next best thing… you can play one on TV.

The new ABC / CBS soap opera, “Members Only” is having a casting call for people to play country club members and staff. The show will film in Purchase NY and they are looking for locals who want to be in the show. Purchase NY is in the White Plains are and there are a good amount of country clubs around.

Natalie Zea (Dirty Sexy Money) will star in a ABC‘s upcoming series Members Only. The new drama from CBC Studios is described as an upstairs / downstairs soap opera that will be set in a Country Club. The show was previously called “The Club“.

The show will focus on the relationship between the wealthy country club members and the staff at the club that runs the place. Natalie Zea will play Mickey, a beautiful, well educated and upscale member of the Country club and part of the club’s founding family. “Members Only” will also star Michael Landes as one of the male leads. Landes plays Malcolm, a pediatrician who is recently widowed and is now a single father.

Joining Zea and Landis will be Chris Conroy, Michael Landes, Betsy Brandt, Callie Hernandez, Boris Kodjoe and Jaime Lee Kirchner. ABC ordered the show straight to series earlier this year. Directing “Members Only” will be R.J. Cutler and the show was created and will be executive produced by Susannah Grant for CBS TV Studios. Also producing the show are ABC Television Studios and Timberman/Beverly Prods. 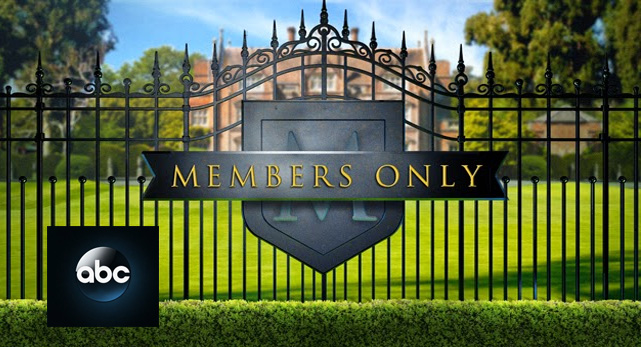 The show is a soap opera so expect to see lots of drama, rivalries, affairs, seductions and probably a good amount of back stabbing. The site SpoilerTV had the info on the storyline…

Welcome to the club… it is Connecticut’s most exclusive with stunning vistas, rolling fairways, impeccable courts. Money and connections will get you in, but the beautiful people and their scandals will keep you coming back.

At its center of things are the descendants of “Members Only’s” founding family: the powerful and wealthy Holbrooke family. Flawless blond Mickey is the queen bee and a force to be reckoned with. This tightly wound tennis champ is never far from a glass of wine or anti-anxiety pills.

Her father is 79-year-old Winston Holbrooke III. The old man has still ‘got it,’ but that didn’t stop his trophy wife from leaving him – for his eldest son, Win. Before the two ran off together, Win left the finances of the club in the hands of a Wall Street scammer. Now, the club is millions in debt and may not survive…..

Must be available for a night shoot tomorrow 9/23. Filming in Purchase, NY (transportation provided from Manhattan.)