Outwit, Outlast and Outplay your competition to get on CBS Survivor 2016.

Survivor is now casting for their 2016 season and there are open casting calls scheduled for this month. Casting teams for the show will be in Idaho Falls, Idaho, Vail, Colorado and Minneapolis Minnesota looking for contestants who have what it takes to compete on one of the longest running reality competition shows on TV.

Survivor, first premiered on May 31, 2000 and has been on TV for 15 years now. The CBS show is produced by Mark Burnett and is hosted by Jeff Probst. The long running reality series usually casts a diverse group of individuals to compete for a huge prize of 1 million dollars. The group  cast will be taken to a remote, and usually, tropical location where they will be split into teams and forced to work together to further their teams position. Survivor is the name of the game and contestants will do just that. Stripped of most comforts, contestants will be left to build their own shelters and survive with minimal necessities. As the show progresses, people will be voted out. With every episode, one of the Survivors will get the boot and be out of the running for the big payday. Of course, the last man or woman left in the game will get the dough and title of sole Survivor….. If you think it should be you, here is your chance to try out for the 2016 season of Survivor.

All contestants must be US citizens, living in the US and 18 years or older at the time of application. Producers are looking for a diverse group of men and women who represent a broad cross-section of American society. Competitors will be judged based on having the following traits: strong-willed; outgoing; adventurous; physically and mentally adept; adaptable to new environments; interesting lifestyles, backgrounds and personalities. If selected as a semi-finalist, candidates will be invited for final interviews with SURVIVOR producers in Los Angeles.

MINNEAPOLIS, MN
Join WCCO-TV at the Mall of America on Saturday, August 15 at 11 a.m. for the chance to become a contestant on Survivor!
Tell us why you want to be a contestant and you could be cast in an upcoming season of Survivor!
Entrants must be legal U.S. residents age 18 or over and meet certain eligibility requirements. 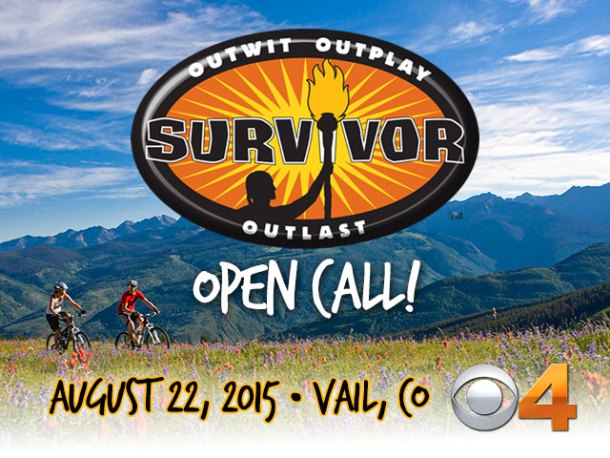