The plot focuses on Scottie Templeton, a popular actor who has spent his life shirking responsibility. When he discovers he is terminally ill with leukemia, he attempts to reconnect with his long-estranged son. Scottie Templeton’s is a charming, irresponsible fellow. A sometime Broadway press agent and former scriptwriter, he’s everyone’s friend, nobody’s hero and a great womanizer who’s managed to live over fifty years without taking anything seriously including love, marriage and fatherhood. Life’s been one continuous gag. But at fifty-one, he finds the script has been rewritten as a tragedy: he is fatally ill. His son Jud, alienated by years of neglect, comes to visit. Scottie’s one concern is to make friends with his son, for everyone else adores Scottie including his ex-wife, his friend and boss, and his doctor, and after a bitter, revealing confrontation, father and son are reconciled. And it is Jud who gets Scottie to agree to be re-hospitalized for treatment and then organizes a giant tribute to his father in a theater.

Tribute was nominated for both a Tony and a Drama Desk Award.

“Very funny, and at the same time a touching work.” — WABCTV 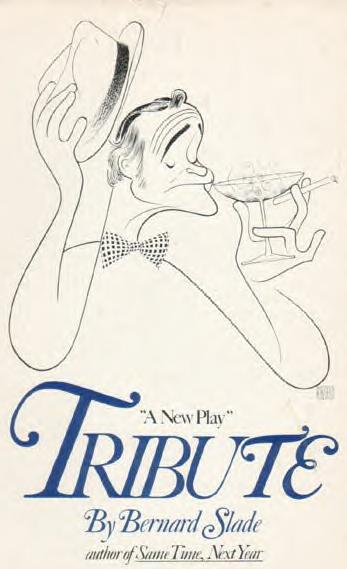 Please submit to: Auditions will be held on Thursday Dec. 10 from 7:00 to 9:30 PM and Sunday Dec. 13, 2015 from 2:00-4:30 PM at Westfield Community Players, 1000 North Avenue West, Westfield, NJ 07090. The cast consists of 3 males and 4 females. Auditioners should visit: http://www.westfieldcommunityplayers.org/WCPauditions.html for full details.

This casting notice was posted by: Westfield Community Players