Open auditions for Disney musical are coming up this week in Nashville, TN and Detroit, Michigan. The Broadway show is going on a national tour and is casting strong male dancers that are technically trained, able to tap and sing. The show is looking for male dancers between the ages of 16 and 22 of all ethnicities.

The Disney musical is based on the 1992 film produced by Walt Disney Pictures which starred Christian Bale, David Moscow, Bill Pullman, Robert Duvall and Ann-Margrett. The show is inspired by the actual New York City Newsboy Strike of 1899 and tells the tale of homeless kids who hustle newspapers to make a few bucks. The Broadway musical won a Tony Award for it’s choreography and is produced by Disney Theatrical Productions. 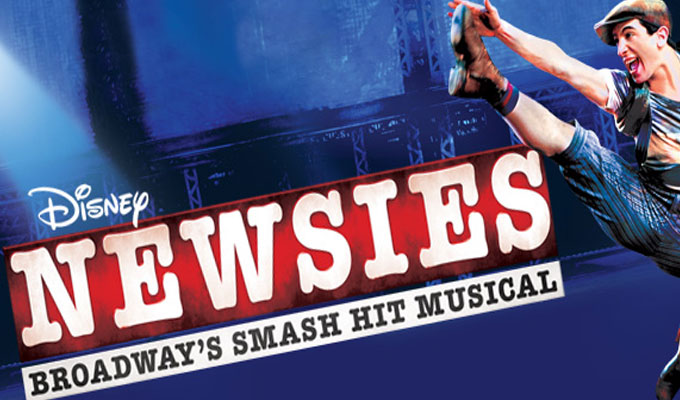 The following information applies to all dance auditions below:

BRING/PREPARE: Please come ready to dance for all of the above auditions with sneakers, tap shoes, comfortable clothing and a photo and resume.

No late comers will be admitted.

Participation in the NYCDA event is not required to audition for Newsies.

Please come ready to dance for all of the above auditions with sneakers, tap shoes, comfortable clothing and a photo and resume.

No late comers will be admitted.
You may be asked to sing afterward, please prepare material linked here

Here is a clip from Disney’s Broadway show…

The big news on Broadway is NEWSIES! Winner of the 2012 Tony Awards® for Best Original Score and Best Choreography, audiences and critics alike are calling it “SOMETHING WORTH SINGING ABOUT!” (The New York Times)

Inspired by the real-life “Newsboys’ Strike of 1899,” NEWSIES is Disney’s brand-new, New York musical about an unlikely band of underdogs who take on the biggest names in publishing in a remarkable fight for justice and fair pay. With an incredible breakout cast and the best singing and dancing on Broadway, NEWSIES has quickly become “THE TALK OF THE TOWN!” (Newsweek)