The auditions are scheduled to be held on Saturday, the 31 st at the Ice House in Jackson.  There are many open speaking and non-speaking roles for a variety of age groups including kids. Talent attending can request a copy of the script / lines that they will be reading at the audition prior to the event via email. See the full instructions and details below.

The film will begin production next month and filming will go through mid March. Talent applying must be local to the Jackson area or able to get to the auditions (and possible filming location if cast) at their own expese since no travel costs are being covered by the production.

All talent MUST work local to central Mississippi at his or her own expense (travel, hotel, etc.) 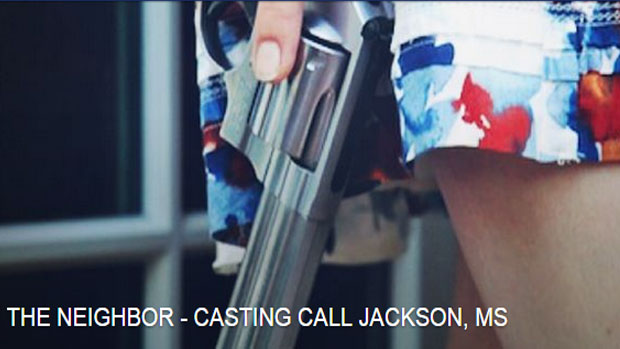 [CHASE] 21 years old, childish and immature. Somewhat good looking, not the sharpest guy. Reference is Tim Riggins from Friday Night Lights. Chase is the father of Heather’s baby. Incapable of acting like a responsible parent, he misses the birth of his child. Eventually, his daughter sparks a new sense of responsibility, and Chase cleans up his act; his floppy hair is combed, and his punk look is swapped for a more cleaned up appearance. This supposedly more mature Chase believes he is better suited to raise their child, and battles Heather for custody…SUPPORTING LEAD (4)

[BECKY] Hard-working and doting, Becky is Heather’s supportive mother. Mid-40s, a bit rough around the edges- life has not been easy. Sensitive to her daughter’s struggles, she is quick to show love and support, but is sometimes at a loss when things get rough. She moves into an apartment with her daughter after Shane recommends an affordable place next door. Supporting the family has clearly taken a toll on her. When Heather has a particularly bad episode, Becky resorts to calling her therapist…SUPPORTING LEAD (12)

[KEN BACHAN] Distinguished and hard-nosed, Ken is the patriarch of the Bachan family. Alex’s Father. Late 40s to late 50s (more in his 50s) He wears his disappointment for his son on his sleeves; Ken prefers instead to treat his son-in-law, Eric, as his favorite. His tune changes when Eric endorses Alex’s new investment plan, but his skepticism remains obvious…SUPPORTING LEAD (42)

[ERIC] In his 30s, slick, confident, Eric is Alex’s brother in law. A successful businessman, Eric is favored by Ken Bachan, Alex’s father. Uncomfortable with his position in the spotlight, he endorses Alex’s ideas, and is happy to give some advice…2 speeches & 7 lines, 3 scenes (8)

[SADIE] 6 years old, bright, Sadie is Alex and Shane’s daughter. Alex and Shane are two of the lead actors for the film – yet to be cast Sadie is most likely Caucasian but do not limit with ethnicity for the child – open to all ethnic backgrounds, mixed race, etc. not yet sure who will play Mom and Dad. She takes a liking to Heather, referring to her as “Auntie”…4 lines, 10 scenes (6)

[JEAN-LOUIS] French, wirey, in his 50s, animated and schmoozy, Jean-Louis is an entrepreneur opening a new club in town. Misunderstanding Shane to be a store owner rather than an employee, he immediately suggest she invest in his club. While securing her investment, Jean-Louis treats Shane like a business partner. As soon as Shane is involved in some legal trouble, however, Jean-Louis is nowhere to be found Open to someone who’s African American and/or a bit overweight, But please do not limit…6 speeches & 8 lines, 3 scenes (22)

[KATE] Neighborly, married to Jennifer. 30 – 45 years. Open to all ethnic backgrounds. She lives in Heather’s building with her wife and two sons. They befriend Heather, and begin hiring her as a babysitter. Their family is later seen at the wedding…4 speeches & 6 lines, 4 scenes (54)

[JENNIFER] Friendly, married to Kate. 30-45 years. Open to all ethnic backgrounds. Jennifer lives in Heather’s building with her wife and two sons. They befriend Heather, and begin hiring her as a babysitter. Their family is later seen at the wedding…4 speeches & 2 lines, 4 scenes (54)

[ALI] In her early 30s, supportive, Ali is Alex’s sister. Knowing her father looks down on Alex, Ali does her best to shed positive light on Alex’s endeavors while at a family dinner. She’s later seen at the wedding…2 speeches & 4 lines, 3 scenes (42)

[PETER] In his 40s, a cheerful, down-to-earth hipster in a wheelchair, Peter runs the bar where Alex works. After Alex becomes a suspect in a robbery, Peter reluctantly fires him knowing he’s losing his best employee…4 speeches & 3 lines, 2 scenes (25)

[SUSAN] This pleasant but stern banker assists Shane with a loan. 30s to 50s. Open to all ethnic backgrounds. She later calls Shane to tell her that the loan has been denied…1 speech & 7 lines, 2 scenes (33)

[NURSE #1] 20s to 40s. Open to all ethnic backgrounds. This nurse tends to Shane and Heather post-delivery. She comes running when Heather panics, and escorts Chase from the room…2 speeches & 4 lines, 2 scenes (13)

[LAWYER] This encouraging lawyer helps Heather plan her trial. 30s to 40s. Open ethnicity. She reassures Heather, explaining the likeliness of the case going in her favor…3 speeches & 1 line, 1 scene (20)

[KATHLEEN] A Kathy Bates type in her 50s, this wealthy customer shops for a dress at the store where Shane works. She’s a bit judgmental after discovering Shane never finished college. Think of her more as Kathy Bates with a bit of a ‘Real Housewives’ look/attitude….1 speech & 2 lines, 1 scene (20)

[NICOLE] Catty, the ringleader of a group of mean girls, Nicole teases Heather about her pregnancy, implying that Heather sleeps around 18 + to look 18. Open ethnicity…3 lines, 1 scene (2)

[PROSECUTOR] This lawyer shouts an objection in court as Shane testifies…30s to 40s. Male or Female. Open ethnicity…1 line, 1 scene (95)

[JACKSON] 9 years old, Jackson is Kate and Jennifer’s son. He plays with Sadie at the wedding, Open ethnicity…No lines, 3 scenes (54)

[NOLAN] 7 years old, Nolan is Kate and Jennifer’s son. He plays with Sadie at the wedding, Open ethnicity…No lines, 3 scenes (54)

[MOLLY) Heather’s baby. Girl. We will need her as a newborn, up to 6 months and 6 months up to 1 year. Please include current age, date of birth, current city, parents’ names and best contact number. – to be booked from photo

[DYLAN] Shane’s baby. Boy. We will need him as a newborn, up to 6 months and 6 months up to 1 year. Please include current age, date of birth, current city, parents’ names and best contact number. – to be booked from photo

Thanks so much, and we truly appreciate the support! Very excited about this film and script!

Please email us to castingtheneighbor@gmail.com
Be sure to include the following info:

Sides/lines will be available at the casting session in Jackson. If time permits, we will try to send them prior to those who email who are best suited for the role.

If you are a represented actor submitted through your talent agency, and selected to self tape for us (through breakdown services), that is our preference vs. attending the live casting session.

The live session will be an open call and open to the general public, giving those who best fit the specs and characters above the opportunity to perhaps read for a speaking part for the film. We are open to seeing local actors represented, non represented, and also “real people/non-actors” hoping to land a line or two in a film. Once again, please be sure you fit one of the character descriptions.

We ask that all babies do not attend the open call – we will book from photo or hold a separate casting session for those two roles (MOLLY & DYLAN).