“Paradise Run” is coming back for season 2 on Nickelodeon and here is a chance to get cast in a Nick show.

Do you want to be cast on a Nickelodeon show in 2019? Here’s a shot to get cast in a Paradise Run season because the Nickelodeon game show is holding auditions.

Casting directors for the Nickelodeon game show are looking for kids between the ages of 11 and 14 to compete on “Paradise Run“.

MysticArts is casting teams of all kinds, besties, siblings, cousins, neighbors, twins and more. Kids wanting to be on the show must know each other very well.

If cast for the show, the team of kids will get to compete in some amazing challenges that will test them mentally and physically. This is a game show which means there is a prize for the winning team. Kids cast on Nick’s “Paradise Run” will be competing to win the ultimate vacation experience.

There are a few guidelines… Kids applying to be on the show must have their parents submit their online audition / application ASAP. Kids must be between the ages of 11 and 14 and a citizen of either the United States or Canada.  Kids cannot apply on their own, they must have their parents follow the directions listed on the flyer below to send in their online auditions.

The series features three teams of children competing against each other in a series of challenges at a Hawaiian resort. It was announced by Nickelodeon that the series premiered on February 1, 2016. The show will be filming this spring / summer between May 1st and June 10, 2016.

According to IMDB, “Paradise Run” is set in the picturesque landscape of Hawaii. The kids game show pits teams of kids against one another in a series of physical challenges. Each episode features three teams racing through an exotic resort to complete challenges that include obstacle courses and water-based adventures. The contestants’ teamwork and stamina are tested as they undertake such challenges as racing across the white-sand beach and careening down a five-story waterslide. Completing each section of the course brings the contestants closer to the finish line and the grand prize, a tropical vacation, which is awarded to the winning team. Actress Daniella Monet (“Victorious”) hosts the half-hour series. 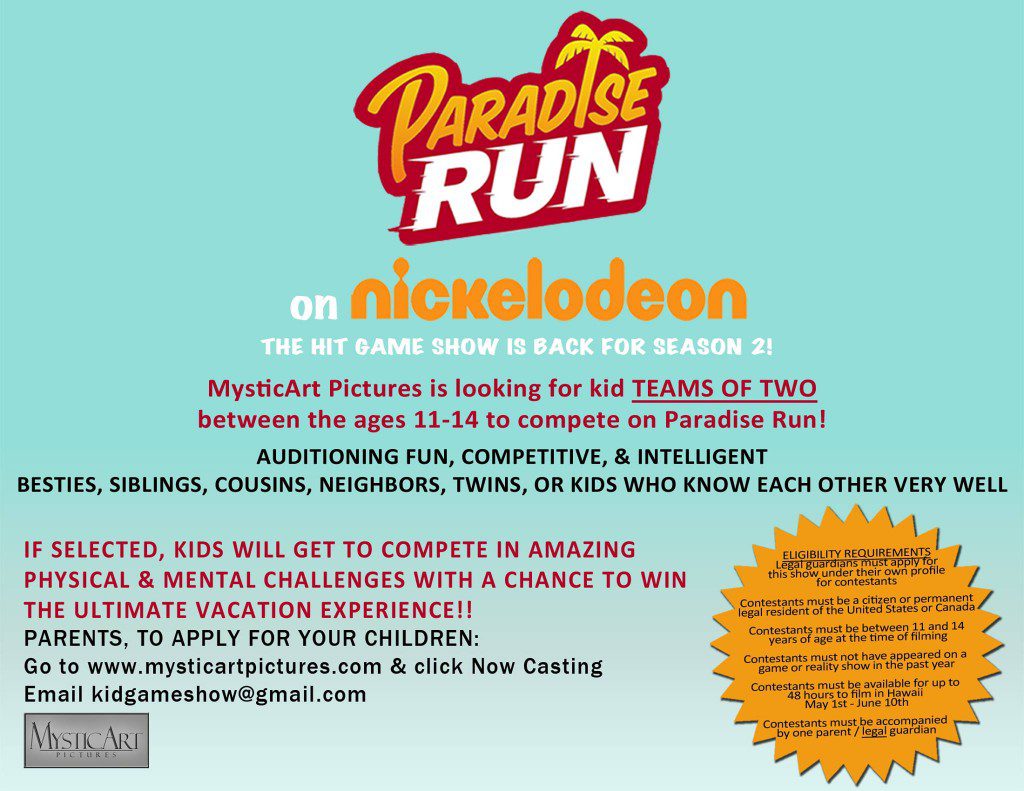 Be sure to also check out all the other auditions for kids going on now.

For information about the new season of the show, Be sure to check out the 2018 / 2019 Nickelodeon show auditions for Paradise Run.