Jackson County Community Theatre will conduct open auditions for the first play of their 2016-17 season, Moon Over Buffalo, by Ken Ludwig.

Sunday and Monday, June 5 and 6, at 7:00 PM at the Royal Off-the-Square Theatre, 121 W Walnut St., Brownstown. The cast includes four men and four women. Show dates are August 19, 20, 26, and 27. John Hardaway is director. The show requires an agile cast and involves sword fights, falling over furniture, people hiding in closets, half-dressed actors, mistaken identities and mass confusion. As in all farces, timing is everything.

Auditioners will need no advanced preparation. Auditions will be by reading from the script. Those auditioning should bring a headshot, if possible, and bring their calendar to be able to give us any scheduling conflicts. The audition form and a conflict form may be filled out at the auditions or downloaded from the JCCT website www.jcct.org and filled out in advance.

Moon Over Buffalo  is a raucous farce about a dysfunctional theater troupe performing at the Erlander Theatre in Buffalo, New York, in 1953. This backstage play by Ken Ludwig (author of Lend Me A Tenor) brought Carol Burnett back to Broadway for a Tony Award nomination. The diva lead actress, Charlotte Hay, is barely tolerant of her philandering semi-alcoholic husband, George, and mishaps and confusions arise for the company when presented the opportunity of famed film director Frank Capra attending a performance to possibly cast the two for a movie. Their temperamental daughter Rosalind splits time between fiancé Howard and ex-fiancé Paul, who works as the company’s stage manager. Charlotte’s nearly-deaf mother, Ethel, and Richard, a would-be suitor for Charlotte, make their contributions to the mayhem as Eileen, a young actress in the company, reveals her pregnancy to all. The hopeful actors sprint through the tangle of confusion to produce a woefully misbegotten mixture of two different plays in their hoped-for presentation piece, and in the play’s climactic scene, manage to set everything right by still more series of coincidences and mishaps. Overall, Moon Over Buffalo is a fast-paced and energetic night of entertainment.

Rehearsals will begin with a read-through on June 13th. Rehearsals are tentatively scheduled for Mondays, Tuesdays, and Thursdays from 7 – 9:30 PM. For additional audition information or to ask questions, contact director John Hardaway at (812) 844-1013 or jmhardaway@hotmail.com. To learn more about Jackson County Community Theatre and Moon Over Buffalo, visit the theatre’s website at www.jcct.org. 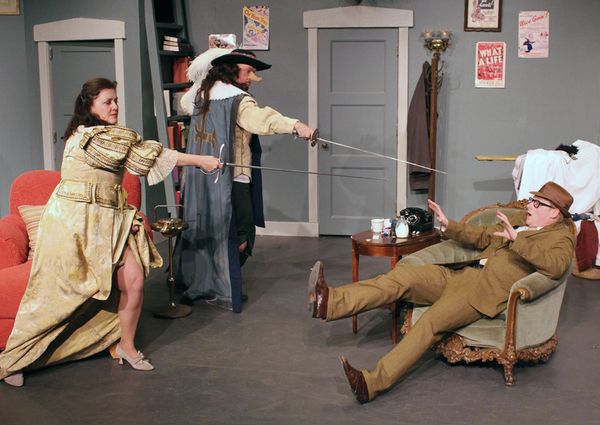 George Hay – (Male, 50s) As leader of his own acting troupe, George has always had aspirations to be famous. He’s a bit of a ladies man but really is devoted to his wife, Charlotte. Very dramatic, a slapstick type, over-the-top actor Must be able to do strong physical comedy, including pratfalls, running, stage combat (fencing), etc.

Charlotte Hay – (Female, 50s) Very much a drama queen. She helps to run the acting troupe and plays all the leads even the ones she’s a bit old for. She is a consummate actress who still has dreams of being a star–at all costs! She loves George but is getting tired of his philandering.

Ethel – (Female, 70s) Charlotte’s mother. Close to her daughter, but not happy with her daughter’s choice of a husband. She is also an actress. Grumpy, trouble-maker, hard of hearing, leading to comic misunderstandings.

Rosalind “Roz” Hay – (Female, 20-30 years old) George and Charlotte’s daughter, used to be an actress and a member of their acting troupe, but she decided that she wanted a real career, so she left–determined never to act again–or be like her parents! Rosalind is, in fact, always repressing her dramatic side, but it’s a losing battle by the end. She has a new fiancé, Howard, but she used to be in love with an actor in her parent’s troupe, Paul. Must be able to do an upper-class British accent.

Eileen – (early 20s) an aspiring actress, eager to please. She has a crush on George and has been having a fling with him. Eileen wants to be a leading actress with the company, and she comes across very flighty and naïve, but ultimately will do anything to get what she wants. She can be played as a bit manipulative.

Howard – (late 20s-early 30s) – a weatherman and Rosalind’s fiancé. He comes across as a wimp, a little annoying, nervous, and very excitable. Must be able to do strong physical comedy.

Paul – (late 20s-early 30s) is a member of the acting troupe, who used to be with Rosalind and still loves her and wants her back; but he is an actor first and foremost, so he wouldn’t leave the troupe to be with her. Paul has a quiet, subtle sense of humor and often holds the company together. Must be able to do strong physical comedy.

Richard – (50s) He is George and Charlotte’s attorney, but he is in love with Charlotte – always trying to get her to leave George. He is wealthy and used to getting what he wants, and he is both amused and perplexed by the Hay family.

City or Location of call: Seymour, IN

Seymour Indiana is about an hour North of Louisville, hour South of Indianapolis.
Please submit to: by 2006-06-05

This casting notice was posted by: John M. Hardaway