The show will be directed by NYC-based director Nancy Robillard, music directed by Markus Grae-Hauck, and stage managed by Emma Iacometta. The show will be presented March 3-5, 2017, at Westminster Arts Center on the campus of Bloomfield College, where the company is in residence. Rehearsals will begin in early January, 2017.

4th Wall’s M.I.D. (Musicals-In-Development) Stage Series gives emerging writers the chance to see and hear their work in the context of a fully memorized, fully staged workshop. All three performances will be followed by audience talkbacks with the cast, director, and creator of the show.

TAKE ONE is the story of the disastrous, hilarious first versions of three great things we are all familiar with. It’s a history-spanning musical comedy that explores the struggles that come with the act of creation, even for the gods. Writer/composer Jeff Ward is a member of the BMI Lehman Engel Musical Theatre Workshop. He wrote jokes for Saturday Night Live’s “Weekend Update” from mid-Colin Quinn through mid-Tina Fey, and writes music and comedy for National Public Radio and the comedy group Euphobia. Director Nancy Robillard has a number of world premieres to her credit and directed off-Broadway and regionally at Luna Stage, Northern Stage, Walnut Street Theatre, MetroStage, Boulders Dinner Theater, and Cumberland County Playhouse; she has also directed workshop productions like this one at The Kennedy Center, The Dramatists Guild, The Lark, and Hudson Stage.

AUDITIONS are scheduled for Thursday, December 8th from 7:00 to 10:00 pm, and Sunday, December 11th from 3:00 to 6:00 pm. Sign-up begins at 1/2 hour prior to the audition start time, and anyone auditioning must arrive no later than 8:00 pm on the 8th or 4:00 pm on the 11th. Auditions will be held at the Montclair Operetta Club studio, located at 494 Valley Road in Montclair, NJ. Callbacks, if needed, will be held on Thursday, December 15th, beginning at 7:00 pm at a location to be announced.

4th Wall is seeking a strong adult cast (17 and over) of at least 7 terrific actors/singers/movers to double and triple the various roles in the three acts (see character list below). Come to auditions prepared to sing 32 bars of a standard musical theatre song; no rock or pop material, please. Also bring a headshot and resume stapled together, and be prepared to provide all potential conflicts for weekday evening and weekend daytime rehearsals beginning January 3, 2017. Non-union; no pay. 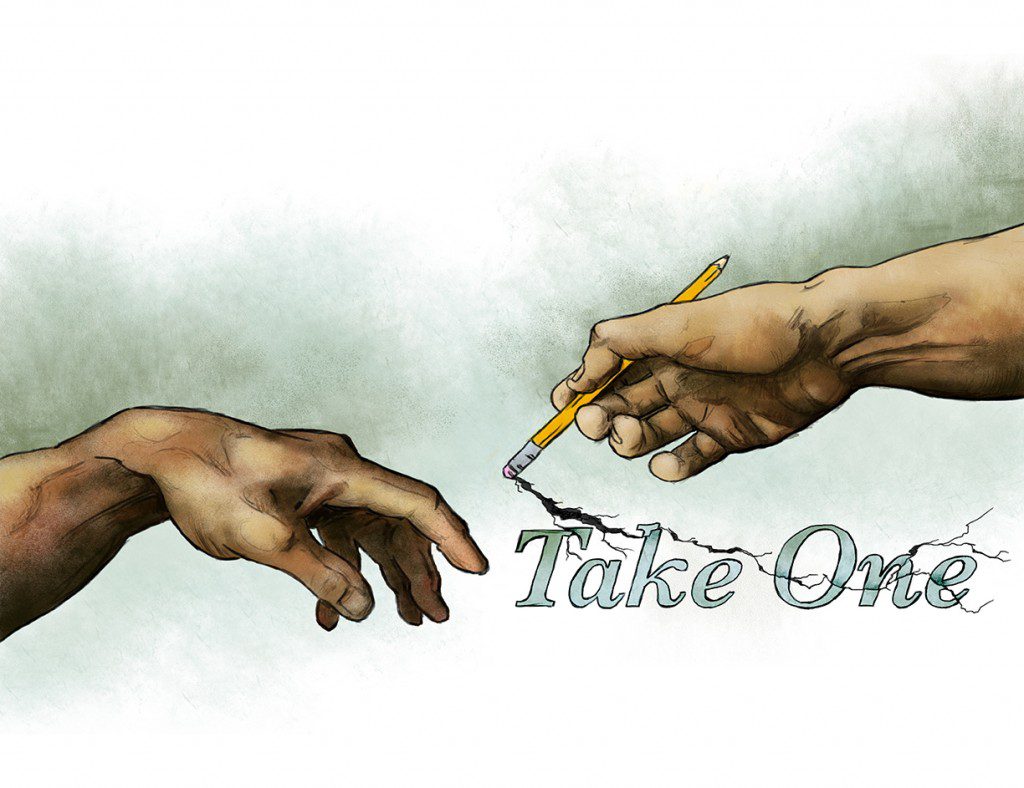 Unless otherwise noted, all roles are written in ranges that can easily be sung by trained musical theatre singers, and most songs can be transposed based on casting.

Act One: “The Ballad of God”
All characters as depicted in the Book of Genesis and classical art.
GOD (tenor)
SERPENT
ADAM
EVE
CAIN
ABEL

More info and directions to the theatre at https://www.4thwalltheatre.org/auditions.htm

Take One is the story of the disastrous first versions of three great things. It’s a history spanning musical comedy that explores the struggles that come with the act of creation, even for the gods.

“The Ballad of God” begins in the formless void, where God is suffering unendurable boredom. He creates the heavens and the earth to keep Himself entertained; the crown of His creation is Adam and Eve. He makes them deeply good and noble, then steps back to watch the fun. The flaw in His conception becomes clear when Adam and Eve ardently obey every command, providing none of the riveting human drama He hopes for. God believes that Cain and Abel are cut from a different cloth and might be provoked into a fight, but after some hopeful signs, they turn out to be as unwatchably good and decent as their parents. The Serpent persuades God to send the first family back to dust and create a new kind of people – creatures with appalling, fascinating flaws. In other words, us.

“The Ludovico Technique” tells of Michelangelo’s first attempt at painting the Sistine Chapel ceiling. When we meet him, he’s a wreck – bitter, sarcastic, and volatile, struggling to break through a creative block while Pope Julius II pressures him to finish. On the day of the unveiling, spectators are horrified to see that Michelangelo has painted the ceiling off white. The Pope is furious and orders Michelangelo to repaint it, this time with an assistant. The assistant, Ludovico, appears woefully unsuitable, but after a rough start he and Michelangelo not only get along, they fall in love. It’s Michelangelo’s first love, and he falls all the way over, blissfully smitten. Elated and inspired now, he paints the now famous glories of the Creation and other scenes, and wins a commission to carve the David. He eagerly anticipates continuing his work with Ludovico, but the Pope reassigns Ludovico to Bellini, who has a similar creative block in a distant corner of Italy. Michelangelo nearly dies of heartbreak, but he has given the Pope what he wanted – a deathless work of art.

“Intervention!” takes place during the 1943 New Haven tryout of Oklahoma! Something seems off with the show, and Oscar Hammerstein has figured it out: it’s the song for Jud Fry, which he says weakens the plot. But Richard Rodgers considers the song his greatest achievement, and refuses to replace it. To save the show, Hammerstein must save Rodgers from himself by staging an intervention. Everyone in Rodgers’ life appears in his hotel room to persuade him to relinquish his pet creation for the greater good – and the integrated musical is born.

AUDITIONS are scheduled for Thursday, December 8th from 7:00 to 10:00 pm, and Sunday, December 11th from 3:00 to 6:00 pm. Sign-up begins at 1/2 hour prior to the audition start time, and anyone auditioning must arrive no later than 8:00 pm on the 8th or 4:00 pm on the 11th. Auditions will be held at the Montclair Operetta Club studio, located at 494 Valley Road in Montclair, NJ. Callbacks, if needed, will be held on Thursday, December 15th, beginning at 7:00 pm at a location to be announced.

City or Location of call: Montclair, New Jersey
Please submit to: info@4thwalltheatre.org by 2016-12-11

This casting notice was posted by: 4th Wall Theatre, Inc.