Lion King Jr Auditions will be held on April 21-28 with callbacks on Saturday April 29th, has been extended from 5 pm-7 pm.

Rehearsals for Lion King will be on Tuesdays, Thursdays from 5pm-7pm and Saturdays from 10am-12pm starting May 2-June 24 and performance on June 24(this is a busy time of year, so please notify us of your conflicts.) If you are interested in being in this show, all are welcome. Please audition to receive your starring role.

Students are asked to sing a song in the style of the show and read sides from the script.

A lively stage adaptation of the Academy Award-winning 1994 Disney film, The Lion King is the story of a young lion prince living in the flourishing African Pride Lands. Born into the royal family, precocious cub Simba spends his days exploring the sprawling savanna grasslands and idolizing his kingly father, Mufasa, while youthfully shirking the responsibility his position in life requires. When an unthinkable tragedy, orchestrated by Simba’s wicked uncle, Scar, takes his father’s life, Simba flees the Pride Lands, leaving his loss and the life he knew behind. Eventually companioned by two hilarious and unlikely friends, Simba starts anew. But when weight of responsibility and a desperate plea from the now ravaged Pride Lands come to find the adult prince, Simba must take on a formidable enemy, and fulfill his destiny to be king. A vibrant and exciting tale from the great creatives at Disney, The Lion King is a story of love and redemption that nobody should miss.

Auditions for Lion King Jr will be held on July 21-28 from 5pm-7pm and callbacks on the 29th. Rehearsals will begin on May 2-June 24 and the performance will be on June 24th. All roles are open.

RAFIKI: A wise mandrill who acts as healer of the Pridelands and guides Simba on his journey home. She is an omniscient character, evincing an air of mystery. Rafiki has significant solos in “Circle of Life” and “He Lives in You,” and leads the African chants throughout the show, so cast a confident performer with a strong singing voice.

ENSEMBLE: The ensemble plays various inhabitants of the Pridelands, such as giraffes, elephants, antelopes, wildebeest, and other creatures you choose to include. This group can have as few or as many performers as your production permits. Be sure to cast many strong singers. There are also several moments to showcase individual dancers in “The Lioness Hunt” and “I Just Can’t Wait to Be King.”

MUFASSA: The strong, honorable, and wise lion who leads the Pridelands. Mufasa should command respect onstage and also show tenderness with his son, Simba. Cast a mature actor who can convincingly portray the king.

SARABI: A featured lioness, Mufasa’s mate, and Simba’s mother. Sarabi has a few key speaking lines for an actor who can deliver the care and command of a queen.

ZAZU: The anxious yet loyal assistant to Mufasa who is always busy trying to do his duty. Zazu’s lyrics are spoken rather than sung, and the role can be played by a boy or girl.

SCAR: The antagonist of the show, overcome with jealousy of his brother, Mufasa, and nephew, Simba. Coldhearted and wickedly intelligent, he will stop at nothing to become king of the Pridelands. Cast a mature performer who can bring out this villain’s dark side while handling Scar’s sarcastic sense of humor. As his solos can be spoken, opt for an actor over a singer.

YOUNG SIMBA: The protagonist of the story, is an adventurous and endearing cub who can’t wait to be king of the Pridelands. Simba is playful, energetic, and naive, but after his father Mufasa’s death, Simba struggles with shame and his destiny. Cast a strong singer and dynamic performer in this role.

SIMBA: Grows from a cub to lion in “Hakuna Matata.” Older Simba has more complex moments as he reunites with Nala, mourns his father, and returns to confront Scar, so cast a more mature actor. Be sure that the change in actors is clear: Try having Young Simba hand-off a costume piece, such as a medallion, to older Simba. Also be sure that Simba and Young Simba share a movement vocabulary.

LIONESSES: The fierce hunters of the Pridelands and featured in “The Lioness Hunt,” “The Mourning,” and “Shadowland.” These actors should be strong singers, as the material can be challenging. Depending on the complexity of your choreography, particuarly for “The Lioness Hunt,” strong dancers may be desirable as well.

YOUNG NALA: A courageous lion and Young Simba’s best friend. She is not afraid to speak her mind. While Young Nala does sing a little, look for a strong female performer who can portray this confident cub.

NALA: Grows from a cub to a lioness before she confronts Scar, so cast a more mature actress to play the character beginning in Scene 10, As with older Simba and Young Simba, ensure that this switch in actors performing a single role is clear. Direct the actors to share a mask or costume piece that distinctly represents Nala, as well as a movement vocabulary.

SARAFINA: A featured lioness and Nala’s mother. She has one short, spoken line, so consider giving this part to an actor who is putting in a lot of effort and hard work in rehearsal as a lioness.

SHENZI: One of Scar’s hyenas who plot to take over the Pridelands. She is the sassy one of the trio and is always looking out for herself. With Banzai and Ed, she should be able to laugh loudly and long, as well as be menacing to Young Simba and Young Nala.

BANZAI: A slick yet childish hyena who works for Scar. He would be the leader of the group if hyenas weren’t so lazy. Look for an outgoing and confident actor who can portray nastiness and gruffness. As banzai is always featured with Shenzi and Ed, consider audit Gender: male ED: The third member of Scar’s trio of lackeys. He has a loud, cackling laugh that is his only form of communication. Ed should be played by an actor who can laugh unabashedly and communicate through physicality and facial expressions rather than words. This role can be played by a boy or girl.

HYENAS: Scar’s army, helping carry out his evil plot to take over the Pridelands. Hyenas are mangy, mindless creatures who sing in “Be Prepared.” Cast actors who are able to sing the background parts of that song while playing the loud and raucous characters. Your hyenas can double as animals of the Pridelands or lionesses.

TIMON: An outcast meerkat who lives in the jungle with Pumbaa. He is afraid of his own shadow, but pretends to be the confident, relaxed leader of the duo. Timon is one of the funniest characters in the show and should be played by a charismatic actor who understands comic timing. This part can be played by a boy or a girl.

Gender: both Vocal range top: B4

PUMBAA: A kindhearted, sensitive warthog who enjoys his simple life of grubs and relaxation. Cast a boy or girl who can portray this loveable and loyal friend to Timon and Simba with deadpan humor. Gender: both 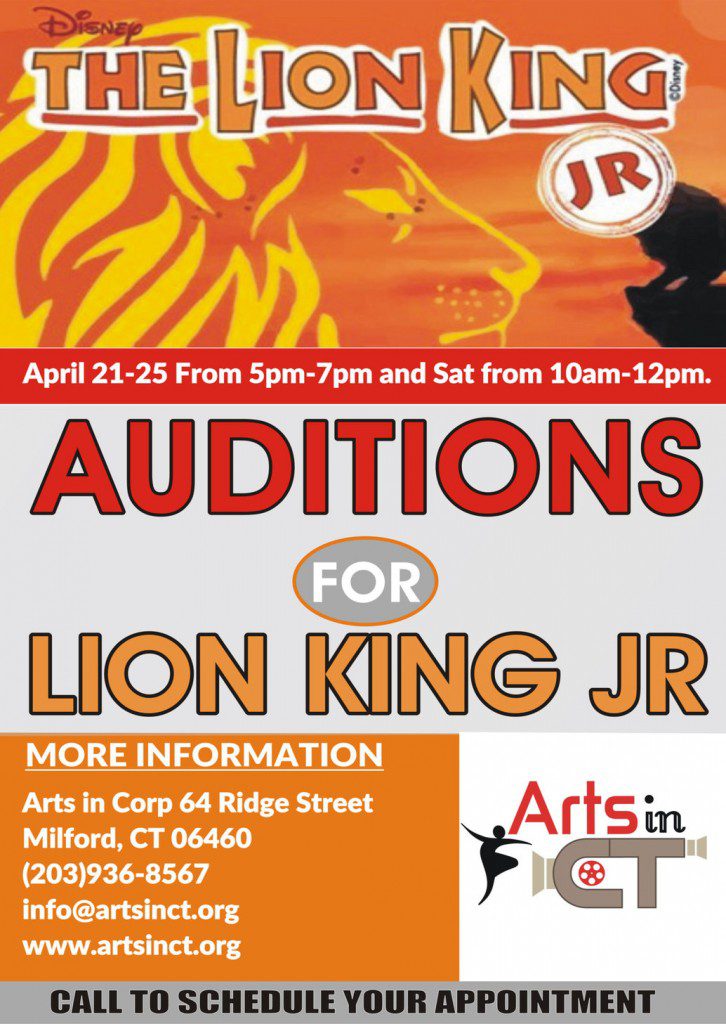 This casting notice was posted by: Arts in CT Corporation